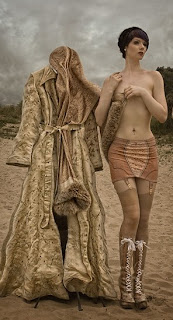 Over the course of my travels in Europe, I have come across a number of sex  museums. In Paris, Copenhagen, Amsterdam, Prague, etc. A Vietnamese eatery in Avignon, France, actually used an exhibit cup I saw! In Japan, there was even a amateur one in a restaurant in Fukaya, Tokyo.

But none I've found in some gal's home, which is a pity. Just kidding!

Before you get all prudish and judgmental, let me tell you I am not one to indulge in pornography nor one to encourage it. Fine, if it is titillation for the sperm bank, but otherwise, I think a shapely gal in swimsuit (like those in Sports Illustrated) is good enough for me. Swell? Haha, no pun intended!

When overseas, a sex museum to me is just another museum. It is only worth its research and exhibits. Well, mostly the exhibits as they are rather unique and uncommon. Sex is after all a rather taboo status in most cultures. And of late I like a museum for its architectural statement as well (such as the Guggenheim museum in Bilboa). It adds to the overall visitor experience. Who knew!

Museum or not, I remember feeling rather shy about the first one I came across in Paris. It wasn't the same feeling as stepping into The Louvre in Paris nor the Prada in Madrid. Over at those two revered museums, once you step inside there's a sense of reverence. You cannot wait to see the work of the Masters. In a sex museum, what would a Masterful work constitute of?

At the time I had just finished checking out the Art Deco arches of the very ancient Metropole subway exit and standing outside at street level. On my right was the famed Moulin Rouge cabaret theatre with its iconic windmill atop on the roof. Opposite Moulin Rouge and just ahead where I stood was  the entrance to the Museum of Eroticism (Musee de l'Erotisme). It looked like an ordinary entrance to a gift emporium.

The MOE was not a standalone building but a double-storey shop below a row of apartments. Its fascade was like some gift emporium with a turnstile as gate entry. It was all colored in regal green, a shade more commonly found in a British gentleman's drawing room than in a bawdy establishment. Hey, maybe that's the reason for it. The British have been known to have weird hang-ups about sex.

To preserve my anonymity, I contemplated wearing sunglasses before going in. I also didn't want my face to be accidentally captured by a CCTV camera and plastered on a tourist poster wall. I think my friends would be surprised to find liberal me this embarrassed. Maybe it had to do with the fact that I have five sisters. My respect for women has been ingrained from a young age.

Being my first sex museum, I had my misconceptions. Was it more museum or sex shop? At MOE's gift shop were many toys for titillating the nether regions. There were condoms, postcards and suggestive lighters... that sort of thing. What we in prudish Singapore could find easily in the Bugis Street Market then.

Inside the museum, there were exhibits displayed in cupboards, open shelves, and on standalone pedestals. Right after the entrance was a Rodin statue of The Thinker, a rather fitting exhibit given its nakedness. The running joke at the time was The Thinker wondering where he had left his pants!

Next, at a turn, was a Rodinesque statue of greenish cast iron showing a man in arched ecstasy. Only that he was missing arms and legs and a head. The arched dynamic of the body was for a reason: it had a humongous penis in full glory of erection. Curved like a blade and reaching the chest. Gosh, I think no woman can resist being aroused by that! And certainly one can hang a hat on that thing!

Art or pornography? It's hard to tell.

If art reflects life, then there is nothing to be ashamed of. We all do silly sexual things in private. Some more inventive than others.

I was thinking just that when I arrived on the second floor and came face to face with a contraption that's not too dissimilar to the one built by George Clooney's character in the movie Burn After Reading. It had the same aim to excite a woman "down there".

Made of wood, it is basically a chair with a bottom slat opened. A crank mechanism is built below. As the crank is turned, a feather is brought forth in the opening. So in this way, a person sitting on this contraption will have his or her privates stimulated. It's a two person thing (one to sit, another to crank), so I suppose it must have been used as a party machine. "Oh, it's my turn, my turn!" some guests must have blurted out in curious excitement.

I am sure there is a self-actuated version for the shyer types. I don't know why but I keep imagining back to those wanton and wasteful King Louis XIV-days, where folks wore white wigs, ceremonial make-up and corseted dresses. And those uninhibited courtiers as described in the French novel, Les Liaisons Dangereuses.

My fave piece at the museum had to be this almost life-size photograph of a rather full woman lying on her side with her head propped up with an elbowed arm. Her breasts were large, skin smooth. Her hairstyle was bouffant-like from the '40s. The pix was in B&W and gave off an aura of olden day romance. The voluptuous lady wore nothing but a mask that covered only her eyes. Even then, I could tell that she was alluring and had some spirit. Standing just some centimeters away from this photograph was a tubular wire frame that traced the outline of her sexy figure. At one end, a loop attached to a wire. I could now see that it was some sort of electric buzzer game, the kind we used to build and play at school science fairs.

I forget how she would light up whenever I failed to move the loop around the frame without touching it. Actually, I think I rather preferred to stand back and admire the buff lady in the picture. She was properly voluptuous in the Marilyn Monroe way!

One funny sculpture on that floor was done in clay and it showed a burly 19th century workman (sans head) ferrying his long and over-sized penis on an improvised plank-barrow.

Strangely, I don't remember many in-your-face type of intercourse figures on display as one might expect. It was all mostly historical artifacts. Not surprisingly, the penises outdisplayed the vaginas by a factor of 7:1. Why is there more interest in the male organ than female? Is it because women were less promiscuous and hence needed more 'aids'? Or is it because a penis is typically a symbol of power and fertility?

All in all this first trip to the sex museum had been an eye opener, and an education. I didn't expect there to be so many artistic pieces. Good or bad, they are historical. And as pornographical objects they served both function and intrigue. We humans are sexual creatures and I don't expect these things to go away any time soon, what with robotics and WWW-enabled 4-D technologies spreading now through the Internet. We will find these too in a museum some day.

Next story: Photocopy Passion
Posted by TC Lai at 10:43