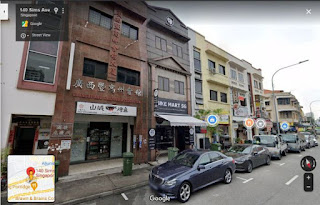 Even the time when I organised a treasure hunt in an abandoned colonial-time barracks (rumoured to be haunted) on Sentosa, in the dead of night, for my engineering classmates, did not turn up any strange stuff. The only pale-face beings there were my classmates who loved scaring themselves shitless. Know that the barracks were large and had been abandoned for many years. The property had no lights whatsoever, so it was eerily quiet and goosebumps inducing. We hid clues in the day and at midnight we set ourselves loose to go look for them, with either candlelight or flashlight.

A memorable sight under those circumstances was always the toilets. There, you will see all manner of previous human activity. Even writings on the wall. Sadly there weren't messages from the spirit world asking if at the next Qing Ming, one might "Eh, can kindly burnt some toilet paper down here, can or not?" I'm pretty sure during this pandemic, well-meaning folks have done that.

This treasure hunt was a cumulation of an end-of-semester BBQ and camping trip on Sentosa we organised for ourselves. Everybody had a blast and I must thank all my ex-mates for being so sporting. No one batted an eyelid, but hell, some were genuinely scared wandering about in that dusty and rubbish strewn abandoned barracks in the dead of night.

This old colonial-time barracks was later spruced up for use as a set  piece in that Master of the Sea TV series. I believe it masqueraded as the mansion of the "cockroach" lady (the matriarch played with evil glee by Margaret Chan)

Now, you might wonder why a young man like me at the time had such guts to go around traipsing about a place with such long and (probably) sad history? The answer is that I've seen ghosts before and was thus not afraid.

The ghosts I saw were not the ones out to scare people with their long hair, long tongue or even longer moans. They were pretty spectacular.

It must have happened when I was about six or seven. I couldn't sleep and was thirsty and heard some noise at the door. My first instinct was that rats were once again gnawing at the door.

My mom heard the same thing and was awake too. At the time, we were staying in one of those three-storey terrace units commonly  found in Geylang/Sims Avenue, you know, the ones with the spiral staircase leading down to a back lane. If you look closely, the kitchens are all "open plan" and folks back then had to use roll-up bamboo blinds to shield it from the elements, In the morning, roll up to let fresh air in and at night, roll it down to prevent bats from flying into the house. Because my neighbour's open plan  kitchen faced us, we would also string a pulley system across so we could share dishes or simply dip into each other's condiments when we run out.

On the night of the door noise, I was thirsty. It was a balmy night and my mom was also awake and in the kitchen to fetch me a glass of water. It was then we heard the noise at the door. We both thought it was probably rats gnawing at the door again. I went to open it slightly but could not see anything. It was pitch black. What I saw afterwards stayed with me for life. Know this: at the time, we were staying on the uppermost floor. Each floor held two units facing each other. There was no way to go further up.

But that was what I saw in that pitch blackness. The sudden appearance of two individuals (a couple, actually) shimmering and holding hands and fleeing upwards.  Imagine a pitch black void on a wall and two characters fleeing as if climbing up a set of stairs.

I watched the scene for a while till it faded and closed the door. I then told my mom what I saw. "I think I saw two persons "fei siong hue" (Cantonese meaning "fly up there"). My mom took a look and then locked the door. She didn't say anything. My mom was quite fearless and not the "easily scared" type.  She usually took such phenom at face value. She always told us kids: "This world where got so many ghosts one." - She had a point. So many millions die each year, how come ghosts are few and far in-between. At least every 17 years we get a cicada harvest.

Anyway, after my mom locked the door (as we often did before going to sleep) we discovered some cockroaches in the  kitchen. I smacked a few with a wooden clog; my mom simply caught them with her  bare hands and threw them out. My mom was fearless with cockroaches like that, but see a tiny lizard she'd melt into a damsel in distress. I could never understand that.

The few cockroaches we took care of were just the beginning. We found a flock (a "flock"?)  of them hanging onto the back of the blinds. Imagine that!

Yes, imagine that. A blind-ful of cockroaches. Since when was that a thing???

So that night was made the more memorable because me and my mom stayed up all night to smack off the cockroaches.

Years later with much regret, we moved out of that Sims Avenue apartment. But guess what? Our across-the-open-plan-kitchen neighbour told my mom that our apartment was "very, very" haunted. They often saw a spirit old couple wandering about in that empty house.

An old couple we never saw.

But for a couple of years when we lived there, we shared the apartment with my grandma and her kids. Amongst them was a bright young lad. Sadly, because the family disapproved of him having boy-girl relations with a girl, they both went to Hokkien Street and jumped.  Hokkien Street was a popular location for suiciders in the 60s back then because of the Lim Yew Hock era-built flats there. They were the tallest buildings to go jump.

It is a sad story with these two kids (they were about 16 or 17 at the time). Both looked to have a beautiful future ahead.  I still pay my respects to them during Qing Ming at Pek San Teng.

There's been much demolishment and rebuilding in Geylang all these years, especially when old houses gave way to more lucrative apartment multiplexes. Geylang, after all, has about 44 lorongs in all.

Our abode at Sims Avenue withstood change for many years. Our apartment is still there but has been rendered "lansai" (shitty) by the turnover of migrant Chinese workers over the years. The unit address is 140-B, opposite a famous durian stall. I hope to go back and buy it someday. no matter its "haunted" history. I had a wonderful childhood in Geylang... Despite that cockroach saga and seeing those shimmering beings.

Previous story: The Medium's Son; next story: I Married A Ghost Bride