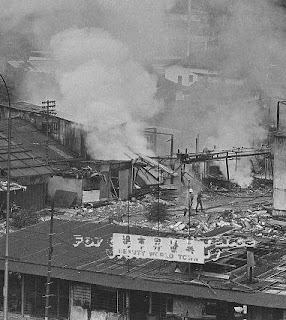 My school did not have workshop facilities, so whenever workshop classes rolled around, we would make our way to a nearby school, usually a government-funded MOE school. If the classes started later, we would leave our own school usually after recess. Else we would head to our workshop school first and then return. This made us feel like migrant workers. But it has its rewards. Moving about gave us reason to loiter outside, especially if workshop class ended earlier than the normal school day.

One such popular hangout place was next to the old Beauty World market. I believe it was along Siew Tin Road. At the time, our workshop technical studies were done at the nearby Toh Tuck Secondary. There  was an empty square behind the market and a Mama store nearby. We learnt from a fellow classmate (Meng Thye, a nice big-sized fella with little interest in school) that besides sweets and entertainment magazines, it also sold porno mags. Not just Playboy or Hustler, but yellow mags from Taiwan, Hong Kong and Thailand. Of course we boys were grateful and ashamed at the same time. We would have been happy just ogling at girls in bikinis, let alone skin. So we flipped through the mags, had a good laugh about the whole thing, and that was that.

Besides these skin mags, the Mama also ran an arcade game inside his store that was more akin to gambling. The machine resembled something of a self-made Pachinko machine.

But what was unforgettable was Beauty World Market itself. I think it was formally called a Town than Market. It was situated at 7-mile along Bukit Timah Road and it's Mandarin name, "Qi ying li pa sa",  referred to it as such.

I liked to roam about in BWM because it reminded me of the Sungei Road market; it too had an old world charm. But unlike SRM, the market itself was a tight warren of shops selling a rojak of stuff. Under that great expanse of stall canvases and zinc roofs, cooked food, fruits, sundry and departmental goods were sold. A stall that faced the main road was especially popular; it sold char kway teow. As it was behind a bus stop folks on their way home or having to change bus rides would queue to tapow the noodles back. For me the market was where I frequently bought my school shoes and stationary supplies.

The shoe shop reminded me of the one that was featured in the HK movie Echoes of the Rainbow, where Simon Yam's character was a shop-owning cobbler. It too had a glass showcase although the one at BWM was a revolving one. I know because at one time, the glass case displayed a pair of good-looking white canvas school shoes from Taiwan. The brand was ROC, not the country but the bird. Perhaps it was a play on Taiwan's international acronym. At the time, Taiwan was pretty ostracised, no thanks to Big Brother China. Everytime I passed by that shop, I would ogle at the shoes, telling myself that I would get them once my own school shoes expired. It didn't take very long as I often played badminton. The game was fast-paced and put great stress on the feet. Every time I moved around court, one of my trailing feet would cause holes in the sides of the shoe canvas leading to premature wear and tear. That ROC shoe looked tough, and smart.

Another brand of shoes I would buy is Fung Keong, who sold a Badminton Master look-alike. The white lines that run by the side of the soles were more plastic than rubber but they ran on their red coloured ones as well unlike Bata. On red, they looked really nice.

Near this shoe shop was a back staircase that led to the back and side of the market along Siew Tin Road. The sun that pieced through that opening often lit up flying dust, kicked up by folks who hurried through.

Not far from this shoe shop was that stationery shop. It was quite neat and somewhat big. I believed it was called Grassland or chao yuan. I often shopped for my technical drawing supplies there, including Pentel pencil leads and Tombow or Steadtler erasers. They sold technical drawing blocks as well.

Over the years since I left secondary school, I seldom visited the market. For one thing, JC was hectic. Immediately after that, national service. In July 1984, not long after I RODed from the army, BWM caught fire. Some 20 shops were burnt but luckily, there weren't any casualties. However, what that was left standing was soon demolished.

Not long after that, Beauty World Complex was built diagonally across the road. Many of the former shops from BWM restarted their business there, including that Grassland bookshop. Some of the food businesses also moved upstairs to the hawker centre. It remains a good food haunt till today, famed for its satay bee hoon and Chinese mutton soup. For some reason, towels I buy from a shop there do not discolor or shrink.

There are a couple of shops there that I would visit each time I go to BWC. A toy shop that sells a wide range of playthings both local and imported, and an equipment antique shop run by actress Michelle Chia's uncle, who was once a policeman in khaki shorts. I am still eyeing that 1950s battery-operated bike torch he has in his cupboard. Its design is reminiscent of the finned autos from that era.

Over the years, I have certainly wished I had gone back to BWM more often to eat and take pictures. Perhaps my classmates who lived around that area did. It would be good to look them up. Maybe they could also tell me what happened to that enterprising Mama and his shop.

But that cleared space where BWM once stood remained vacant for a long time. Then a small car park was built to cater to late-night supperers at the nearby Al Amin prata place. A few years ago, construction crews moved in to start on the MRT line. I am not sure what else is planned for that space in the future.

A lasting image I have of the market was the last day of our exams. Clutching our technical drawing boards, we waited by its side road for friends to go watch Jackie Chan in his new Drunken Master movie. It was being screened at the cinema across the road in Bukit Timah Shopping Centre. It was a very funny and good movie that caused us boys to be 'drunk' for a while. After the movie we went back to the market for fried fritters. The place which sold them was old and not too clean. But, man, the fritters were good!

Next story: The Story of Winnie 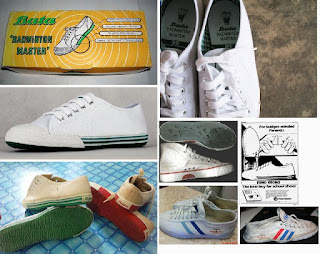