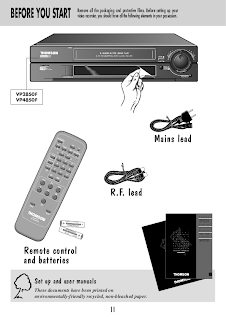 Speaking about places of work, I am still impresssed everytime I see that National factory sign in Bedok. A classmate of mine worked there as a power supply design engineer more than 20 years ago. If there is one positive thing to say about the Japanese companies, it is that they are long stayers unlike the Europeans.

Europeans tended to go to where the labour is cheap.

That's my experience with them in the early 90s. But credit must be given for their ability to uproot and replant.

At the time, I was working as a New Product Evaluation Engineer in IVP - a joint venture factory between Thomson and Toshiba. It made video cassette recorders (VCRs) for export to the rest of the world.

Before you say "Eeeww, such old tech!" I must say that we were were not making old Ford Model Ts but the VCR version of modern Maseratis.

The VCRs we produced were sleek, fast and full-featured.

Thomson VCRs had the best on-screen displays (the screens that appear on TV to interact with a user) and the fastest rewound speeds in the market...reasons why Toshiba partnered with Thomson in the first place. Anybody who has ever used VCRs in the 80s would know how frustratingly simple the Japanese on-screen menus were. Few VCRs then had FPDs or front panel displays: most just had a counter to measure how much tape had been played.

Nevertheless, the Japanese were very good at manufacturing.

Interestingly, even though these two companies were joint venture partners, they each kept their own separate R&D departments in the factory. The Thomson team had a dedicated  software group to look into on-screen instructions and the brains that ran the whole VCR. Trying to control a servo motor (not a digital one) with a two-bit or four-bit controller is very challenging. A guy I knew in Europe became a rather celebrated engineer because he was very good at it. A servo motor in a Thomson VCR has to perform quite a few neat tricks. It has to spin fast and stop quickly without breaking tape. There are also programmed-stops and slow motion. All in all, quite a feat of engineering.

Back then, state-of-the-art semiconductor chips were just getting better. An Intel AT PC that booted up with Microsoft DOS OS was considered quite good. Digital components were improving but still a longways to go yet.

As a member of the small New Product Evaluation Group, I interacted very often with the R&D folks. I always found the Japanese chaps to be more willing to look at any small hiccup that might handicap their VCR product. And they were rather professional about it.

I remember a problem we once encountered after doing a six-point spark test (a high voltage test to simulate electrostatic discharge). One particular corner of the VCR would always cause the whole VCR to stop functioning. Although it was just a 1/6 chance, the Jap R&D fellas took it seriously and found a solution for it. It did not matter that an extra capacitor was needed in the end, to be added to the original design and parts-list, but these folks cared more consumer safety and experience.

In NPEG our task was straight forward but not easy. We had to make sure that any new VCR product intended for production would pass all qualification tests, i.e. tests such as functional, audio, video and RF. It also had to pass an external audit before being allowed to be manufactured. Most times we had to build on we've learned in school and look at a problem for what it is and tweak the machines to perform the way they should. We turned Engineering into both art and science.

It was especially trying when external assessors from Paris were around. They would want to approve new models of VCRs for production after having traveled all that way to Singapore. We could not disappoint them by saying "We need to send this model back for a redesign! Haha...". Plus, the New Product Engineering people (not Evaluation) would have made sure that the VCR designs were already up to scratch before passing it on to us; we had long meetings for that sort of thing. But given the many stages and processes in manufacturing, even the best designed VCR would exhibit hiccups at some pilot production stage.

And it is the Pilot Run, Trial Run and Lab Run folks that make sure these hiccups are spotted first. We shared our office space with them sweet folks. The role of the PR/TR folks was to simulate the actual production run of all new VCR models. The LR folks, on the other hand, worked frequently with concept models from R&D than real-life mock-ups. Their job was to ensure that the R&D designers were production savvy. Concept models tended to look garage-made with casings constructed of hand-machined/assembled acrylic boards.

We enjoyed working with the PR/TR/LR folks because they were a fun bunch. Many of them were young but highly qualified operators; a majority of them were from Malaysia. They often used the latest "xin yao" Mandarin songs as test audio tracks and that's how I got to know music groups like Grasshopper and Wang Chieh songs. If not for these test-run folks, I probably would still be a mushroom about these popular bands!

The head of stores in this PT/TR/LR place was a woman called Ah Noi, a bossy and gregarious lady who was rotund and short and not much in the looks department. But she added much color to the proceedings. Her loud and piercing voice would rattle the racks whenever one of her girls slipped up in their tasks. I remember Ah Noi crying once also when she was mistakenly accused of something she didn't do. Ah, gossip was rife with her around. She was what we would call a "character" - the sort that would remind you of her birthday and then cajole you for an ang pow or treat. A few years ago, I heard she passed away after an apparent heart attack - news that was related to us no less by one of 'her' PR/TR/LR girls.

Given that we would go through roughly 22 models of VCRs every month, the factory was rather large and fast-paced. It was. We had 1800 employees spread throughout a four-storey main building and some more at a two-storey Annex. This smaller building was especially built to manufacture VCR drum heads, the little magnetic fellas that does the actual tape reading. It's all a very sensitive and delicate kind of operation and required the building to be specially designed and built. No unnecessary vibrations and disturbances

With regional markets, we had to adapt our VCRs to a particular TV system. Our machines ran on PAL, NTSC and SECAM. PAL itself has many flavours: B/G/DK/I/L/M/N, each letter denoting how sound paired with its video. Mostly, our VCR tuners simply auto-detected these signals. SECAM was the French terrestrial TV standard. It was only recently replaced this year (Nov 29th) by another modern system. Like France, many countries have migrated to the DVB-T standard or some variant of it.

A couple of mysterious engineering problems cropped up during my time in NPEG. Once, a VCR started displaying black fuzzy lines on TV. It caused a big hoohah because it was already in production. The New Product Engineering manager was put on the spot. After all, it was his team that OK-ed the initial design from R&D. Fortunately, this chap, Gene, was technically competent (he was a RCA Technical Award recipient). He deduced correctly that it was due to an RF transistor. A faulty batch had been supplied to the factory.

The consumer electronics business is like that, often having to use the lowest-cost components to make the best top-quality product. It's fast paced (just like Advertising) and why I got into it. With components, cheapest may not be the best and there would be lots of homologation tests done before its use is OK-ed. It's challenging but rewarding.

Another case was even stranger (this time, a functional problem). A cassette deck that was loading tapes 100% here was found working only 90% of the time over at our sister development lab in Indianapolis, USA. For some reason it would fail during one of their 'idiot' tape loading tests (such tests simulated how a careless user might load a tape improperly into a VCR).

Try as we might, we could not repeat the problem here. In the end, running out of idiots, my manager decided to send me to Indianapolis to see for ourselves the problem they said was happening over there. This was a time before video conferencing so I was glad for the travel opportunity. Plus, my manager had a shopping list of stuff only the US had that was cheaper. It was some ski ropes and archery stuff.

True enough, the engineers at RCA weren't hallucinating. The problem occurred after the VCR had spent some time in the Life-Test room - a place that simulated a VCR working in a country full of hot desert sand and camels. We had the same conditions here in our LTR so, why did the problem not show? It was all quite strange. In any case, regardless of whether we shared the same problem or not, it was a problem and so a solution had to be found. Our poor mechanical engineer Vincent in Sg had to work overtime to get that fixed.

On several occasions, because our automated test station was shared between workers, it often got infected by viruses as floppy discs got read and written over. One particular virus - the Stone Virus - a common one then, would corrupt a hard disk's FAT sector. If that happened, then nothing in your drive could ever be read. You'll get that message: "(A)bort, (R)etry, or (F)ail".

One time, I got that message and as usual, tried to recover using a clean boot disc. But try as I might, it could not be done. We were frustrated because we had a week's worth of data inside that test set-up. Losing all that data meant turning up at an important meeting empty-handed. Not good.

At the end, out of options, I decided to just wait. Perhaps in the morning, things might be different.

Sure enough, when I tried again to access the hard disk, its FAT sector was back. I was both happy and relieved. Nevertheless, I ran the antivirus program once more just to make sure. Later, I would send out a memo to say that in future all disks would be scanned before they could be used in our test-setup. We would also be more diligent with our data back-up schedules. I didn't think we (or I) could take anymore such heart-attack situations.

From these episodes, I learned that despite all the technical knowledge we possess, sometimes, things just happen the way they do. At best, there is nothing you can do but sleep over it. In that latter case, it worked. I didn't have to pull my hair out over it or beat myself up silly!

Note: As a Technical person, I usually prefer some logical explanation when things go wrong. Then we would know how to deal with the same problem next time, just as how we might approach medical symptoms. But working at NPEG and dealing with the problems there, I'd learned to be more forgiving (the French has "C'est la vie!") But at the back of my mind, these unanswered questions remained. Next: Fukaya 1: A New Beginning

I bought these sci-fi books while at Castleton, Indianapolis, where RCA R&D was based. These books were speculative fiction: they contained high-tech musings from scientists and a sci-fi-probable story from a leading sci-fi writer.  Published and edited by Byron Priess. 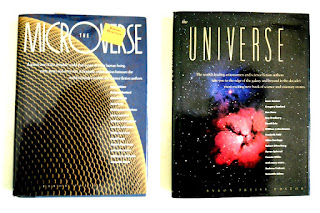