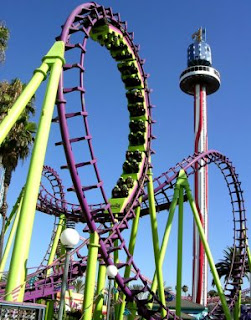 I returned to LA five years later with my girlfriend May. She had not seen her aunt for a long time and so wanted to visit. I was coming off from a long press conference in New Orleans and needed some R&R. So we decided to meet up in LA, stay for a few days, and then scoot off to explore SF.

I met May at her aunt's home in Orange County. There were no gunshots to be heard this time coming in from the airport on the highway. Aunt Annie's house looked the same as before: white, grey - same nondescript.

The inside was the same: No change in furniture and the parrot, well, it still had the same lousy attitude.

Unlike everything that was same-o same-o around her, Aunt Annie had aged a little. She seemed paler and her walking problem a bit more exacerbated. Sons Ray and Steve looked middle-aged and heavier.

The greatest change was grandson Rian. He had grown from a baby to seven now. He was tall for his age and could easily be mistaken for a 10-year-old. Because of his parents, he had mixed-blood: half ang-moh (Ecuadorean), half Chinese (Singaporean ABC). Judging from his looks, he'd probably grow up to be handsome.

Having not see May for many years, Aunt Annie had a lot of catching up to do with this niece of hers. They did have a day or so before I arrived.

That evening, the family took us out to have Chinese dinner. No Indian food like the last time. Aunt Annie and I laughed over that. And I confessed that I was actually half-pulling her leg requesting to eat thosai masala. Anyway, I told her I thought it was marvellous that she could speak Tamil. She said she was just lucky to be studying in India at the time. She didn't have any playmates who were Chinese.

That night, May and I retired to Rian's room. Poor boy had to give up his room to us. I hadn't seen May in a while and we missed each other. Before dropping off to sleep we made ardent love. We got so tired that we woke up late. I felt apologetic afterwards as it's not in me to do it on someone else's bed. But I missed May.

That morning, we decided to book an LA City tour. Again we (or I, actually) did that through Buena Park Hotel which was about a mile from Aunt Annie's place. The both of us were actually not keen on packaged tours but since LA was a city with many iconic attractions, we decided to do the smart thing and let someone familiar drive us around instead. Our rented a car we left parked outside the hotel to await our return.

The tour (a Combo one that included Universal Studios) brought us to many places: there was Mann's Chinese Theatre (where the Hollywood Stars' Walk of Fame was); Hollywood's biggest stars' homes; shopping at Rodeo Drive; lunch at Farmer's Market; and Universal Studio.

Mann's Chinese Theatre was a surprise. It was small and looked like a relic from Fu Manchu's time. Because it was tied to so many Hollywood red carpet events like the Oscars in the past, I had expected a more impressive building. The star's handprints in the front courtyard was another eyesore. They were done in plain cement and was really unglam. Only the Walk of Fame looked classy with their better tiles and handiwork. But still, the Walk was let down by the poor state of the surrounding sidewalks, which were cracked, old and broken. Places like LA make you appreciate the well-maintained public spaces of Singapore.

May found the star belonging to The Carpenters and took a picture with it. I took one with Bugs Bunny's. I've always been a fan of this smart-mouthed and quick-thinking cartoon rabbit (at times cross-dressing too) - encouraged in no small part by the fact that I was supposedly born under the Chinese zodiac sign of the Water Rabbit (Water Tiger, actually).

Bugs Bunny's Hunting Season (a.k.a Pronoun Trouble) cartoon remains my favourite clip of all time. Watch it, it's damn funny!

Because LA had been featured so many times on Singapore TV (in American movies and sitcoms no less), the tour brought out many familiar places in our memory. So even before we headed into Sunset Boulevard to see some of the stars' mega-rich homes, we'd already recognised places like Cedars Medical Centre (where many Hollywood stars go to heal or die), Hard Rock Cafe, City Hall, etc. I even recognised the oldest Catholic mission there. I think it was featured in Pretty Woman of Beverly Hills 90210.

Some of the Hollywood Stars' homes we saw were simply palatial (if not, why show them at all!). They belonged to Danny DeVito, Jack Nicholson and Charlie Chaplin. They were all along Sunset Boulevard. Just before that, The Comedy Club where almost all of Hollywood's famous stand-up comics made their debut. It was built in 1940 (formerly Ciro's) and opened in 1972. Truth be told, the front of the club was rather boring, like some catering tent. They should have retained the Ciro architectural look.

From the stars' homes, the tour coach took us to Rodeo Drive. It's a semi-wide street with glass-fronted shops on either side selling very expensive and branded stuff. Many of the shops were not walk in: You would have to make a booking first. Rodeo Drive was small and quite the letdown, actually. Champs Elysee (Paris) or Orchard Road (Singapore) were better. At Rodeo Drive was Planet Hollywood and Hard Rock Cafe restaurants, each with their own memorabilia on display inside their establishments. I found Planet more meaningful as I'm a film buff.

After Rodeo Drive, we had lunch at Farmer's Market. I don't remember it as a market as such, you know, like those in Seattle or Melbourne.

After lunch, the coach took us to our last destination, which was Universal Studios. There we took the Jurassic Park Ride, had our pictures taken with the huge jawbone of Jaws at a fake pier, saw a Beetlejuice stageshow (which was very entertaining) and learnt movie-making (foley and camera angles ala Alfred Hitchcock) at the pretend-lot of Back To The Future. Besides the house of AH's Psycho, the original DeLorean car was also on display there.

A memorable moment was during the Jurassic Park Ride when we visitors were supposed to be washed away by a runaway column of water. It was an Indiana Jones 'moment' and everybody in the tram car was thrilled by it.

After our LA tour, May and I returned to her aunt's home in Orange County. The next day, we made plans to visit Knotts Berry Farm with May's nephew, Rian.

KBF was a Peanuts comics-character driven roller coaster theme park not unlike Disneyland with their Mickey Mouse and Gang. If you enjoy this comic strip by Charles Schultz, you will like KBF. The other outstanding attractions there included a forward and reverse corkscrew roller coaster ride called Boomerang; a Wild West town; a genuine Western-era steam train (with a staged train robbery); a museum cum gun shop, etc. I found Boomerang unusual: The ride was already thrilling going one way in a corkscrew manner, but at the end it goes backwards at the same speed. Never had I ridden a roller coaster quite like that before. Besides Boomerang, there were other high, thrilling rides like the Hammerhead and Parachute.

I went on the Boomerang ride with Rian. Poor boy came down looking green. But it was my fault. I had forgotten that he was only seven. But because he was tall, he qualified to take the ride. He complained afterwards of giddiness which caused me some concern. But it went away soon enough. Next we decided to try something a little more mundane but just as enjoyable: Winning a prize at an old American fair-style shooting gallery (the sort where metal targets gets pinged and a ponged and hopefully get knocked over?) It was nostalgic and challenging (if not rigged, that is).

The next day, May and I debated whether to drive or fly to SF. Given the kinds of long-hour jams on the highways, we decided it was safer to fly, and we did.