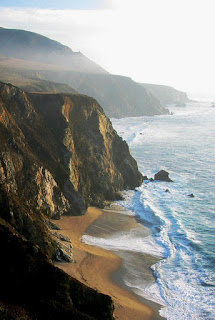 Carmel is a small municipality by the Californian Monterrey coast. But I think most folks remember it for its town centre which is made up of a warren of single-storey shops arranged in a grid fashion. Roads are more pedestrian than traffic and beautified with shrubs and trees - kind of like Singapore. All in all, it was a very pleasant place to stroll in and shop at, which is what most people do when in Carmel.

When we were there, we found a range of shops. One sold large, hand-built R/C planes; another sold monogrammed bath towels and robes; yet another sold very colorful and jazzy knitted-wear from Australia. There were also a number of designer jewellery stores. The shops were not huge, each like a mid-sized convenience store or smaller. This kept the place cozy and homogeneous.

At the end of the town center was a quiet tree-shaded car park. Through this and a gap, we were told a footpath led to a beach and sea. May and I followed it and was surprised by what's on the other side.

Whence it was once quiet and shaded, there was now a scene of lively people frolicking in bright sunshine. What a change it was from a few moments ago!

The beach we were on was quite small. But the most unusual thing about it was that it had black sand. Were it some ancient volcanic residue? Apparently such sand is common along this section of the continental coastline.

But there was one more unusual thing. I observed that many of the teenage girls there were wearing cloth bikinis (in small red and black checks). They also wore wrap-skirts. It all seemed like a throwback to the '60s.

We strolled along the water edge for a while and tested its temperature. The sea was really cold. Since it was still April, we weren't surprised. As we were not intending to swim or picnic (the beach was crowded), we decided to head back to the town centre for some afternoon cake and coffee. May and I discussed where to go next after Monterrey. We were very good on time and looking at our map again, spotted Yosemite. It seemed to have quite a number of attractions and didn't look very far and very high. By our estimation, we could reach the place by 4pm with ample time to travel back. So decided we continued with our coffee and cake.

When evening fell, we retired to our room at the Western motel to rest. The Western was a family-oriented motel chain in the US that offered very clean and decent rooms at very reasonable prices. It was actually the first thing we saw entering Carmel town centre.

We left Carmel the next morning after a hearty breakfast. We then turned into Highway 101 which is the equivalent to Australia's Ocean Road. Needless to say, the drive was both enjoyable and scenic. Everything on the right was mostly ocean view. I only wished we had been driving an open top car and not the Toyota Tercel hardtop. But the Tercel was new, economical, and actually a rather decent drive.

May laid her head on my shoulder and squeezed my hand. She was really happy and content. It was wonderful to see her like that.

From Highway 101, we soon reached Monterrey. This was home to The Monterrey Cannery Row, a former fish canning factory-strip that was featured in John Steinbeck's novel of the same name. There's also a well-known sea aquarium which was purposely constructed as part of the sea.

One of the loveliest things we did was find a row of quaint cottage-shops by a beach. Around the place were wild grasses and many giant cattails that towered over me. They were all wispy and wind-blown, imbuing the location with a kind of forlorness and longing. Perhaps Steinbeck saw the same and wrote a book.

In town, we discovered an antique car rental business and posed for pictures with their 1920s-lookalike vehicles parked by the street. We then drove around to look at suitable accommodations to spend the night.

We eventually found a very lovely one with real stone firesides in their rooms. It was aptly called Fireside Lodge and was situated right opposite the US Navy's Postgrad School (at Sloate Ave) which was a top research facility and academic institution in the country, and world.

For good reason, May and I were very happy that night. I remember we making love like two newlyweds long into the night and morning.