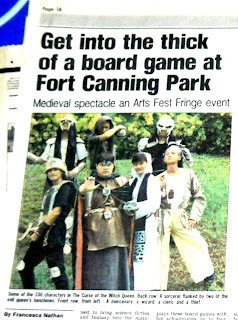 What's a LARP? you may ask.

It is Live Action Role Playing - a kind of game. Just in case you think Singapore is too boring or staid to be having such great outdoor fun, think again.

In 1990, many people came dressed as knights, fairies, adventurers, witches, warlords, etc., to do battle on Fort Canning Hill where a medieval village was built complete with a tavern (with beer), costume shop, apothecary (spell merchant), sword maker, slave auction site and gladiator arena. There was even a maze.

The whole of Fort Canning Hill was converted into a ghoul infested medieval country where the righteous did battle with the wicked; the latter nursed and encouraged by a Witch Queen - a tall and imposing figure reaching some 12 feet in height.

The Curse of the Witch Queen LARP opened and closed the Arts Festival Fringe activities that year; it included dance performances from Africa and a traditional drumming outfit from Kelantan, Malaysia.

The COTWQ event was planned, run and executed by the Science Fiction Association, Singapore, better known as SFAS. I was one of its past presidents. SFAS still exists today but only as a Google Group (no admin compared to being under the Registry of Societies).

At COTWQ I was its chief builder in charge of making everything that was on Fort Canning. I was not alone in that. I had great help from a number of fellow enthusiastic volunteers, many of them students, full-time NS men and mostly avid RPG PnP (role playing game, paper and pen) players from our sci-fi society. They came forward to spend many weekends and week-nights at two workshops in Bedok Vocational Institute to saw, hem, paint and paper mache various props. We shuttled back and forth, drank lots of coffee, and went days without bathing. So committed we were!

The Art Council gave us funds and Black & Decker sponsored the necessary power tools. Wood was bought from timber yards in Kranji and food was "tapowed" much from Bedok Central hawker center.

The COTWQ demanded a lot from all those who were involved but never mind. It turned out to be a huge success and ultimately a most unforgettable event in the annals of Singapore's literary and role-based gaming history. Now, I have to ask: Were you there? Heh-heh.

More photos here: Curse of the Witch Queen  The next story: One Leg Left 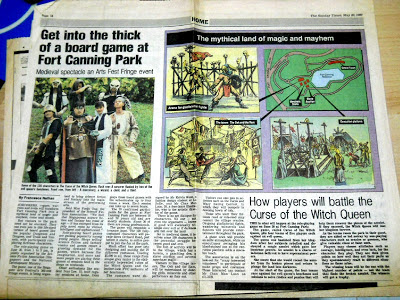