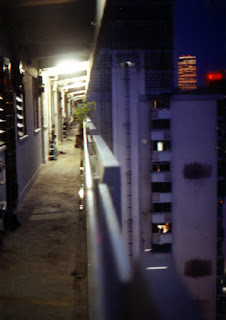 I was cooling off at my HDB corridor one balmy night when a lady with long hair, white gown and questionable make-up glided up towards me. Ok, maybe that was because a bead of sweat had also glided into my eye, blurring my vision and causing me to wink excessively as well.

That "graceful" apparition saw and winked back. Oops, did I just make a chance connection?

Immediately, a chill blew over me. Quite typical, no? of this kind of "strange" encounter. It was then I realised the next door aunty had moved herself out of her flat with stool and KDK fan to cool herself off.

She saw me and scoffed. "Harrumph!" Not very Singlish, I thought, but that was the sound she made. She was probably unhappy that was I dating a ghost girl again.

"TC, why don't you go find a proper girl like everybody else, huh?" she once told me.

"Aunty, they are really nice girls lah. And if they want the 5Cs from me I can get them under $30 at the joss shop. Maybe throw in a pack of facials as well. They are selling those things now. Estee Laodee, SKII++, Revlong, etc. You want?"

That usually shuts her up.

"You siao ah?" she would retort, and stomp back into her flat, not without turning to also give me her usual (and disapproving) harrumph. "Harrumph!" She has a knife sticking out her back, but since she didn't mind, I didn't say anything.

At the corridor, me and the ghost girl would hold hands and stare straight ahead. Her hands would be cold and clammy. At times, slimy.

"Sorry ah," she would apologise. "Slime very popular with the tweener kids now. They learn to make them on Youtube and then sell online. The pearlescent ones are especially very pretty!"

She stares at her hands and seems lost in thought. At length, she would not elaborate further, just grip my hand tighter. Adversely, that drains blood from my face making me very compatible with her. At this, we would look at each other and smile. She squeezes harder. I look more pale. Couple happiness moves to another level.

At the opposite block people sometimes gather to stare at us. Many a time they would take pictures and post to a hantu FB page. Because my corridor has been updated to those movement-control lights, the pictures these people take often appear dark, unclear. Mightily tinted with a hue of skepticism.

- "Wah, is that ghost couple last time jump from same spot one?"

Maybe we shouldn't have jumped. Did I? Did we? But who can decide what Fate might bring. The moonlight fades and we are gone.

Till the next time.

Previous story: A Night A The White House; next story: The Medium's Son