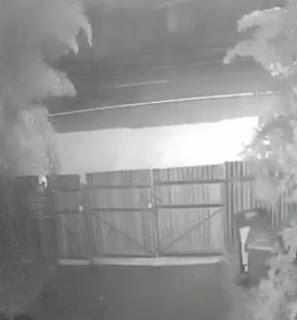 When you see ghosts often, you can get fed-up. Fed-up with their skin tone (often pale), fed-up with their wardrobe (macham cut from curtain), fed-up with their posture (often hunched), fed-up with their attitude (often morose). You would hope to find one with at least a "glass half full than half empty" attitude, but no. They all seem to hang on to some grudge, some unfulfilled wish, like waiting long outside a LiHo bubble tea shop only to be told they have run out of your favourite order. Nabeh.

Isn't death a release? Isn't that why people commit suicide? To end it all and ascend to that place with the fluffy clouds and harp music? Or 72 virgins (who must be pretty aged by now) standing next to a K-Y Jelly dispenser that is still expecting its first token?

Apparently suicide isn't all that sweet a way out.

I know because I asked one. He was standing on the other side of a gate of a driveway whose house I was tasked to look after. My friend Ben's old family home.

The ghost young man said: "With suicide, you are in limbo. You cannot be somewhere until they figure out if you have offended Heaven's Mandate. If your fate is to be the next LKY of Sg and you suddenly decide on your own to be just as dead as he is, then Heaven will not be happy and will punish you. If they find out that your ambition was to be the next Anabelle Chong, then they will say "C'est la vie", or suanleba. Coz there's already too many Anabelle Chongs out there for you to matter."

"When you first die, your human functions are still pretty much intact. These urges will only slowly fade over time. You still pee, you still pung sai. And do you know how frustrating it is to reach for that toilet paper only to see it slip through your fingers? Obviously being dead we lose connection to the physical world. So, our first shit, no toilet paper. Many then walk around afterwards with a dingleberry hanging on like some dear friend. As you can imagine, not very comfortable. -This is also why some prefer to wear gowns with an open crotch. And why many a place with spirits often have that pungent smell. You had come along when "somebody' was doing his or her "business".

So now you understand why we all just-died-one spirits have that "look" on our faces. We are not constipated; we are just tulan/paiseh/boh pian all rolled into one. I was a very good graphic designer before I decided to take my own life. Even I could not have designed an emoji to reflect that...that look!"

A certain Disney animated movie came to mind. But quickly, I was like Wow, that was some sharing! I did not expect that. Meanwhile the gate beside me groaned as more spirits appeared on the other side. I checked if the lock would hold. It rattled but held firm.

"Well, after your final dump, that's not much of any earthly attachment left. You feel a sense of relief actually, so much so that you feel as if you are floating. That is why some spirits you come across have their feet off the ground. That is why you don't have to be frightened like some girly taxi driver along a deserted road. No need to be scared scared one. Laugh if you can because that ghostly bugger had just pung sai!"

Hahahaha, this young man ghost chortled. If he had space, he would have just collapsed on the floor ROFL. But the driveway was getting crowded. The young man soon corrected himself because the other spirits were giving him their best death stares. He soon became morose again - just like them.

"Sorry, got out of character there just now."

What? Did he say he just got out of character? I was beginning to think there was some conspiracy afoot.

I stepped back to have a think about that. Meanwhile, I kept a raised eye on the gate. Through the slits I could see plenty of bodies and shadows moving about. All waiting as if there was going to be a Black Friday sale.

According to a Taoist priest who came, asked for the toilet and then disappeared, he told me that my friend's house was along a spirit highway of sorts. And that the longkang river behind was actually the River Styx of Chinese mythology. You know, a place to wade in and forget what your life used to be. A total reset.

A famous bridge (guarded by an old lady) spanned it.

"If you ask your friend, he would have seen that old lady walking about sometimes," said the Taoist priest, a tad too nervous for my liking. That was when he excused himself, went into the toilet and never came out.

That was before I told him that I had already seen one old lady. She used to drop by quite often to ask if got old clothes, old newspapers and old radios. A karang guni kindred who pushed a trolley cart full of discarded cardboard. I asked her once how much per kilo for the newspaper and she said, "Forgot liao." Typical.

Previous story: Ghost Girl; next story:  A Night at the White House