A Monster to Live With 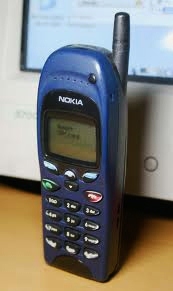 Of all the nostalgic events I recall, nothing bothers me more than the history of the mobile phone. Its history is short. Very short. But many things have happened in between. It's as if the chick you were feeding worms just the other morning has suddenly turned into a giant monster destroying your furniture and stomping its feet demanding to be fed steak. Anybody in that situation would feel frantic and wonder "What in the world is happening?!" I think I know now how the aged feel about IT and its pervasive and intrusive impact on their lives. It's a monster they have no control over and one that is slowly squeezing them out of their comfort zone.

Mobile telephony is no less a monster than IT. You can still ignore IT to a certain extent. But mobile telephony demands that you pay attention. It's a monster with a narcissistic bent. You look into the mirror and you want to become one. Buy the latest handset, subscribe to the latest data plan. Like the proverbial Eve, we have also developed an irrational craving for an Apple.

As a kid, one of my heroes is Ultraman. He still fight monsters that pop up to destroy his city. I think over the years, I have fought this monster well. It doesn't consume me. But, like the incubus that rears its ugly head, my own history is linked closely to its birth and growth.

As a journalist from the mid-1990s, I  have observed the rumblings of this monster in its egg. As an industry insider, I watched, like most expectant parents, a sonogram of its form and shape. I celebrated each beat of its heart. I saw its first outreached digits.

Later as a PR professional, I was instrumental in helping it grow, behave and capture other people's imagination. This kid is the future, I would tell an audience like any proud parent.

I sold them stories and imaginings that said: "We have need of mobiles just as we did of the pager, and much more. It will free us, bring us TV wherever we might be. Make us readers and scribers wherever there might be coffee or a cafe. The newspapers will become 'e'. Distances will vapourise; nobody needs to fly  anymore. Conference time will be facetime in the street, in the cab... Anywhere. Given such dedicated care, my monster grew; slowly but surely, from 1G to 3G.

My first glimpse was in 1999, when I was sent to Stockholm to help organise a 3G Experience Centre opening. My client then was the largest mobile phone equipment maker in Europe. As Europeans, they preferred the GSM standard of mobile comms, not the CDMA that was aggressively pushed by the Americans. A lot of business pie was at stake. A pie that even a small slice was worth billions in potential earnings.

As part of my familiarization with 3G technology, I was given first-hand experience of how it worked. On the third morning that I arrived at the office, I was ushered into a van. Inside was a 3G phone. I looked around for the familiar handset; there were none. All I saw was a small push trolley full of electronic equipment. As a former RF engineer, I recognised some of the stuff. That's the 3G phone alright, said Nilson My Guide, affirming what suspicions I had.

The van took me on a short ride between two towers, situated some 300m apart. They were metaphorical towers, buildings equipped with 3G antennas. I watched as a face slowly comes to life on a small monitor on the trolley. It was the face of my host back at the 3G EC. The signal was shaky but clear. At that moment, I felt like one of the astronauts who first landed on the moon. There I was experiencing what many mortals have yet to even glimpse. Indeed, I later found out that I was one of the first few Singaporeans to actually experience this technology. The others, I figured, must have been the head honchos from telcos like Singtel and the then new M1, all potential and existing customers of that Swedish firm.

As a sci-fi enthusiast, I felt as if I was living a moment that would forever redefine us as human beings. Something was being birthed in that compound that would impact a whole lot of people, change the world. It felt really good to be privy to that.

Later that month, I returned to Singapore to continue to do more work for this client. The CDMA people were not idle either. We fought pitched battles (the PR sort) from KL to Bangkok to Beijing. In China, it was one province after another. The Chinese were not dumb. They had learned by then not to be beholden to any Western technology, to any legacy issue they have no control over. They knew their market was a goldmine and so wanted to develop their own TD-SCDMA system. Japan was the same. Hong Kong was a big conference destination at the time, eclipsing Singapore even. In this 2G/3G war, many bloodied heads could later be found there in that city of many neon signboards.

Once back home, we made plans to further promote this monstrous technology, painting it a wonder with endless capabilities that make lives more sweet and businesses more prosperous. It cumulated in a 3G Blue Sky event ('Blue Sky' meaning "endless opportunities"). 3G, it seemed then, was a beast to be nurtured and tamed good. A King Kong event that would have thousands queuing up for a bite of the action.

But the thing about telecom technology is that it is also tied to another monster called economics. In the accounting department, this one has another name: budget. Companies who had spent millions on a 2G network aren't going to upgrade to a 3G network overnight. Standards have to be observed to settle interoperability issues. Mobile phone users want seamless roaming, not change handsets from GSM to CDMA and vice versa once they cross borders. And besides, where were the fancy 3G handsets that consumers have been promised? Have they been designed? Manufactured even?

Sadly, no. And that was what held 3G back at the time. It's simple: One cannot have a network with no viable handsets for its subscribers. And battery technology at the time was not sufficiently advanced enough to make 3G handsets the handy devices they should be. I don't think even the most trendy folks want to push a trolley around just to show off (haha).

That was what I saw a couple of years later when I was working closely with the Centre of Wireless Communications or CWC in Science Park II. The year was 2002 and they showed me a 3G handset that was not much different from the one I saw in Stockholm. As a matter of fact, it seemed a good few inches taller and wider also sitting on a trolley. Instead of a Swedish firm, this trolley 3G handset came from Japan.

I concluded then that 3G was still a long way away. It was.

From 2G, the monster grew horns and became 2.5G. It stayed 2.5G for a long time, happy with it oats and whey. Operators simply refused to throw steak at it to make it 3G. Hey, our networks are still good sending and receiving data packets in addition to voice calls. We can wait for 3G proper, they all said. In other words, if my customers are in no hurry, why bother investing in a faster car?

Besides handsets, worldwide standards of 3G also had to be mutually agreed upon by worldwide technical and commercial bodies. Everything would have to come together in order to grease future action. Nobody wanted a repeat of the video tape war between VHS and Betamax.

Someone also had to figure out the "killer app" that would draw users to 3G, much as email did for office intranets and the internet. Could the killer app be video calls?

As it turned out, 3G was more about getting the bandwidth to surf the Internet. Having large capacity memory cards so phone users could playback their music and videos. Having a longer lasting battery so the handset would spend less time charging and more time serving up talk-time and in time, apps.

Yes, like a newborn, the 3G monster required not just a single thing but a host of stuff to thrive. It took 10 years for 3G to learn to walk, now to run. Soon people will start calling it 4G. Monster handsets have already evolved, featuring two heads instead of one. What else will we see? Can we wean ourselves off its pervasive and invasive presence? Will the cloud feed this monster or tame it? Will wi-fi inspire it to gobble up and spew more things out?

I started out with a Nokia 6150 in 1998. It had a postage stamp greyscale LCD screen and simple SMS texting. A popular game was Snake. The handset was the size of a banana. Now I own a compact Motorola Android phone. It has 8GB of memory, a sliding keyboard and a touch screen that allows me to make video calls, surf the Web, play Chinese chess, snap a picture to take part in a contest or read e-books. It's even faster than my computer in 1998. What a one-eyed monster of a handset it is. A monster, I tell you.

Late 90's Alcatel GSM phone that ran on batteries. I kept one as an emergency phone. 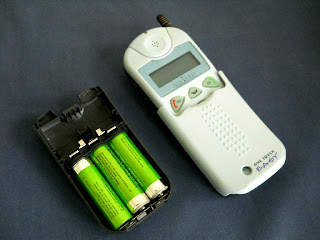