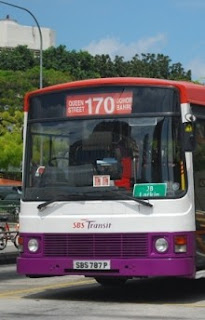 Writing about Bukit Panjang made me recall friends who lived just further up along Woodlands Road before the Yew Tee junction.

Many of the houses stood alongside the railway tracks. If they were on the other side of the road, they were mostly up on a slope embankment (Kampong Lengkok Saga?). Classmate Cedric used to lived there near a Shell petrol station. His house was typical of those in the area - a combination of brick, cement, wood siding, louvre windows and zinc roof. Most of them were painted in light shades of green or blue. Each had a compound that was beautified with grass and flowering plants like bougainvilla or hibiscus. The houses altogether looked quite picturesque especially on a bright sunny day.

Schoolmate Allen and his elder sister Anne lived in a similar sort of house across the road by the railway tracks. Allen was a tall lanky chap who played badminton well. He and I were on the same badminton team in school. Both he and his sister were fair- skinned Eurasians that looked ang-moh with their light brown hair and striking eyes. Allen was the more playful of the two with a penchant for pranks and jokes. Anne on the other hand (she went to the same school but was a couple of years older), was more mature and sensible. She was often kind and considerate. In person she exuded a homely sexiness that some plump women possessed. But she was neither skinny nor plump. She and I later joined the same St Vincent de Paul Society that was affiliated to St Joseph's Church, situated next to our alma mater. I was not Catholic but I liked doing charity work. I also happened to like Anne.

I visited Allen and Anne a couple of times and always enjoyed my stay there. Like most classmates who lived on a farm in the area, their families also had fruit trees either in their yards or nearby. I could never forget the longan trees that grew. During fruiting season, Allen and Anne would help protect the longan fruits from insects by wrapping them in soft tracing paper. From a distance, these trees stood out with their care.

Further up from where they lived was Yew Tee village. A prominent road there was Stagmont Ring Road. For many years after, many NS men would use this road, cross the tracks to get to their ulu army camp (Kranji, I think). I myself never ventured in but hung around the atap shops and market by the canal along the main road.

My classmate Ming Yew lived across Stagmont Ring Road in an atap house that led from Jalan Gali Batu. His family too had fruit trees and one time, we climbed a big one to get at its jambu fruits. Ming Yew too was a scout like my other best pal Kok Leong. But he was not as tall and had legs that was longer than his upper body. (We were all rather awkward growing up.) When he and Kok Leong stood together in their scout uniforms, it was quite the funny sight. But both of them were good scouts and would later spend countless hours chasing waves in their scout speedlaunch at Sarimbun, a coastal area off Lim Chu Kang. Ming Yew and I were good at technical drawing and we often sat together during TD class at Toh Tuck Secondary. He later went on to become an architect.

Jalan Gali Batu used to be rather quiet until the RDC company started its operations. Then large vehicles would trundle in and out creating a sand storm each time. I think there was a quarry inside and that the company was involved in construction and building research. When it got unbearable, Ming Yew and his family moved to Ghim Moh HDB estate. His old house soon fell into disrepair.

My badminton coach in school, Tony, was my senior. He too lived near Cedric. He was a strong athletic chap who was also nimble. You had to be nimble to play badminton well. He liked wearing those track shoes that were popular then, you know, the light nylon ones with a thin urethane sole. I'm not sure why he wore them for badminton because they were never strong enough and would tear. I still remember that green aluminium Yonex racquet he used, the one with the shiny steel shaft, before carbon shafts came along. That model was quite popular with competitive players like him. Those of us who could not afford the latest played with wooden framed racquets still, or with the Blacken 8100 models. When I was in Pre-U, Yonex introduced their popular Carbonex 8 model.

Away from Yew Tee past the Mandai Road junction, one would soon arrive at the Kranji war memorial. Along the main Woodlands Road was a Chinese village. Many of the houses lining the road provided motorbike maintenance services. You would find them left and right of the entrance to Kranji Road (west). Classmate Hua Boon lived there. He was a rather chubby chap but looks can be deceiving. He was in fact quite the top notch goalkeeper able to dive and stretch to make fingertip saves. Our school and alma mater was a force in the local secondary school football fraternity. Most schools strived to beat us.

Hua Boon was an easy fella to get along with and always wore a smile. Nothing seemed to faze him. I think his family also ran a small sundry shop from where they lived. I bought an iconic bike from his neighbour who ran a bike fix-up shop. It was a gift from my dad (surprise, surprise) and was one of the first bikes built for off-road use. It had a kind of flat banana seat, front and back suspensions, and thick tires. Though unique, it was actually rather heavy and slow. But I loved it all the same and would explore Marsiling extensively with it.

From Hua Boon's village onwards, one would soon arrive at Metal Box, one of Singapore's first metal forming factories. At one time, it made the news because it acquired the technology to produce the sort of drink can you and I now use today. What's so special about it you ask?. Well, the old kind of cans were like the baby milk cans you find today. They all have a seam that was soldered together. With a soft drink can, there are no seams. It's as if something just punched and drew a whole piece of metal into a small cylinder. This cylinder is then topped and sealed. The factory later became Metal Box-Carnaud, or some joint-venture like that.

Beyond Metal Box, Woodlands Road would end at the Causeway customs. But just before that, on the left was a kampong of sea gypsies living in houses that stood on stilts. A narrow river ran by it to the sea some 300m away. I know the distance because Allen and I (and  Maria Tan and her girl guides) wanted to explore that area. But only Allen and myself ended up in the crotch-deep mud. When we fished up a flatworm that measured one metre long, the girls 'eeewwwed' even louder and became resolute about not joining us in the now suspect mud. I also wondered what else lurked under that inscrutable surface. But not willing to give up and lose face, Allen and I continued downstream to the river mouth. Once there, we cleaned outselves with sea water and hankered down to dig up some mussels. They were just below the sand surface and was an easy catch for us. We later met up with the girls at Woodlands Central  hawker centre and ate some iced "loke mei" (original cheng tern). Looking back, I think Allen and I were quite brave if not reckless to wallow in all that mud. But at the time, we were young and gung-ho.

Across Woodlands Road from this river was an Ajinomoto plant (exactly opposite Woodlands cinema). Anybody who has lived in Woodlands since the 70s can tell you about the huge pond this factory had. It was nothing spectacular for the eyes but it made quite an impression on the nose. It often gave out an obnoxious smell that was akin to rotten eggs. Imagine, a landmark that buses had to pass by everyday to get to town. It was a huge sigh of relief for everyone when the plant was finally relocated to Senoko. Seriously, what was Ajinomoto making then that smelt so bad. And the plant actually looked quite dilapidated. For a long while that brand gave me the creeps.

As the main trunk road heading into the Causeway and into Malaysia, Woodlands Road was often inundated with goods lorry traffic. It was mostly a two-lane dual carriage way and one lane of it going up would soon get bogged down with lorry traffic during the peak hours, and especially so if immigration processes slowed. It was worse when there's an accident. And we residents of Marsiling would rather walk the last mile than get stuck waiting for it to clear. It was only when the BKE opened that congestion on this road eased. Nobody uses Woodlands Road anymore except the trucks. But if you had to cycle to Bukit Timah, this was the only road accessible. Bicycles then and now are still not allowed on expressways.

Right about the time that Ming Yew left Jalan Gali Batu, the area between Bukit Panjang and Yew Tee saw more the comings and goings of construction trucks. I am not sure, but I think it had to do with the soon-to-be-built BKE. All the houses along the road - Cedric's, Tony's, Allen & Anne's were being chased out and demolished. In one fell swoop the whole area became wild grassland again, re-conquered by tall lallang and wild maize. Many a times when I drive past these familiar places, I wonder if it was all that necessary to clear these lovely homes when nothing else was rushing to take their place. If I had not lived in the North, I wouldn't have met these classmates and their lovely families and experienced what I had been given - a kampong warmness and generosity in spirit. It has made up many times over for not going to that good school in the East.

Next story: Lessons In Kranji
Posted by TC Lai at 01:37