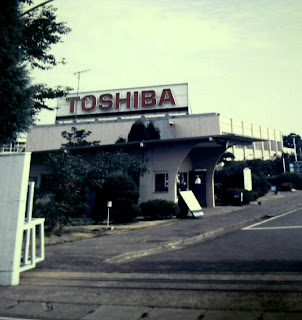 The next morning, we left the hotel and took the short walk back to the train station to catch a cab. I could see the eatery we went to last night - the one with the 'free-spirited' figurines. It had yet to open for the day.

At the cab stand, a few cabs were waiting for fare by the kerb. They were typical of Japanese taxis I've seen on TV - two-toned colored (a red and white combi). I noticed that the cab drivers all wore gloves.

We took the first one in the queue. I was rather amused when the cab door flung open by itself. Singaporean cabs would later adopt this feature some 15 years on but it has not been seen since. I think Singaporeans were just too quick in pulling at the doors.

Our ride to Toshiba's factory was just 10 mins. It stood in a big compound surrounded by a low white wall and a large sliding gate. I could imagine big container trucks going in and out.

We met our hosts Tateshita and Kobayashi (someone from the Overseas division of T's group) at the main office building.  There were altogether five people from Toshiba. Once seated, they were whispering to one another as if to confirm who was coming to the meeting. Later, I realised that although the Japanese didn't seem very extrovert, they shared information pretty quickly.

At this first meeting, Chee and I basically reiterated the purpose of our trip. Our counterparts also laid out plans they had for us. From the looks of it, we were going to have a pretty busy itinerary the next few days. Well, partly because Chee would be returning to Singapore first. I would stay for one anda half weeks in Fukaya to better know Tateshita and his team. The first order of business was a site visit. The next, we would discuss both our parts numbering systems. Later, I would immerse myself in Tateshita's team to best see how my group could support them.

The meeting on the numbering system went quite well. At the end, they asked me if I understood. I said, yeah, not a problem. Language aside, the Toshiba system was not difficult to grasp. I'm not sure about Chee though. He was more keen being a PR person, smiling rather excessively. Later in the hotel he would ask me to explain what he had missed, it was practically the whole lot. (Tateshita was a 40-plus man and he later did ask me if all managers in IVP were as young as Chee. His implication was that in Japan, one didn't get to be manager after a certain senority. I saw his point.)

In that earlier meeting, the Toshiba folks shared with us a pecularity. They had something like US$5 million worth of after-sales parts. That kind of blew me away. IVP's was considerably less and we were more discerning of what parts to keep, mostly the parts that had to do with the VCR itself, parts that broke down often.

The Toshiba folks, well, were keeping items like carton boxes and foam guards that came with the VCR upon purchase. What, are they serious? I remember thinking. Why would they want to do that?

They explained that if a Toshiba VCR owner wanted to move house and needed to pack his machine up, he could order the original packing materials from one of the company's many service centres.

Wow! That's rather ridiculous, no? Who would repack their VCR like that? Would they do the same to their TV, refrigerator or toaster? It all sounded rather silly to me. But also, perhaps it was after-sales service to the hilt? With the Japanese, more likely the latter.

In any event, the Toshiba folks were aware of their problem, that their spare parts inventory was ballooning out of control. They wanted to learn from Thomson a better way. I think they just needed a case study to convince the others to fall in line. The US$5 million worth of spare parts is a lot. And where would you find the space year after year, VCR model after VCR model to store everything?

Tateshita himself confided in me all these later on. He showed me the large building where these spares were kept. I could see it walking to his office. It was all rather mad.

The next day, we returned to the factory and was shown a part of the factory that did video tape research. I was thrilled to look through a microscope and see the actual magnetic video recording on the tape itself. It looked exactly like the diagram in my training handbook during my student days even though that was only a mere grayscale rendering. This was actual and in full technicolor. As normal, the tracks were slanted to enable more room for information to be recorded.

Another area they showed us was where they still manufactured VCRs in Japan. I had thought all manufacturing then were outsourced to our large IVP factory in Singapore but apparently, they kept the high-end ones - those that could connect to the satellite receivers back on home soil. Watching that manufacturing line was a wonder.

There were less than 20 production workers along that single line from start to finish. Folks who pieced, assembled, tested and packed a VCR together. In our factory, we would have needed twice as many workers and on separate floors. In Japan, labour was already very expensive then and I could see how this expert and reductionist way of producing a VCR was helping to save costs for the company and in the meanwhile keeping it active in production.

On the third day, Chee and I were brought to visit two places. The first one was to Toshiba's own advanced service training centre. Its main training room was particularly impressive. Each place along a long counter desk was equipped with a document camera that could transmit live images to a screen in front of the class. The whole purpose was so a trainee serviceman could point out which part of a schematic he did not understand or need more explaining. Similary, the instructor's desk in front also had one.

Such a set-up would seem normal now because vidcams are so cheap and readily available. But back then such cameras were pretty expensive. I remember we had something like that back then in our IVP factory as well. It was a standalone overhead camera projector that was IP-enabled and cost quite a lot. This piece of office equipment allowed engineers from all over the world to look at stuff for discussion - be they schematic, circuit components or simply inside a product (which in our case was a VCR).

Looking at the advanced set-up in the lecture room, I could not help but imagine myself standing in front and conducting a class in the future. Standing beside me at the time was Mr Sato, a tall handsome chap who was most interested in Esther my colleague. He purportedly proposed to her once, probably half in jest. And he would always buy her flowers whenever he was in Singapore. He was proud of the training centre he had helped build and equip.

The other pre-arranged place we went to was in Yokohama. Arriving there via the flyover was quite spectacular. We could look down and see all the portside cranes and containers. It was not unlike our own PSA wharf. I felt dwarfed as our car swept past giantic container cranes and what not. Unlke Fukaya or Tokyo, Yokohama truly announced itself as a gritty industrial port city.

Tateshita had brought us to Yokohama to introduce us to a printing firm that was responsible for all of Toshiba's service manuals - manuals that contained information that Esther, Tuang and I had provided.

This printing firm was not very large and we were shown a printing press that also saddle-stiched the spine of a manual. Thomson manuals were often just double stapled at the spine.

This firm, Yamagata Printing, though small, was a big player in the Technical Writing industry. They could translate an English-language manual into many different languages. I noticed that their head-writer was an ang-moh guy.

That day in Yokohama, our hosts from Yamagata gave us a lunch treat at a rather uppity Chinese restaurant. I liked going to Chinese restaurants overseas. They were more Chinese in decor and ambience than those back home. In Singapore, the designs tended to be contemporary Chinese. This one in Yokohama had dragons, phoenixes and lanterns. The dim sum was pretty good too!

On the fourth day in Fukaya, Chee left, but not before our Japanese hosts had bought us a typical Japanese sushi dinner.  There were altogether about eight of us (all guys) and we had a rousing time. The Japs could be rather noisy after a few drinks. I also drank a bit, my first time with warm sake. (I dunno. At the time, I had a high tolerance for stuff like Tequila, a fave drink of mine. I could drink nine shots and not get drunk. But warm sake was another matter.) That night, back in the hotel room, although the aircon was on full-blast, I was feeling all hot and bothered. I took off my clothes and fell back onto my bed in just my underpants and fell immediately asleep, distinctly remembering how tough it was to eat raw squid. The damn thing was like chewing gum!