Fukaya 6 - Of Handguns and Cosplay 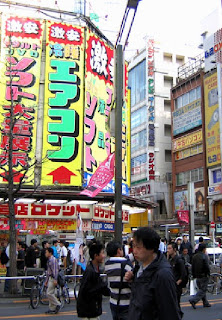 The next morning, I took a train to Akihabara, that Japanese Mecca of the latest in IT and consumer goods from the Land of the Rising Sun. There were many tall glass buildings in that city. The whole place looked like a discount store because the buildings themselves featured glaring highlighter pen-coloured banners dripping down its sides.

I walked around and saw the latest Star and Epson dotmatrix printers and other gadgets. Remember, this was sometime in the early 90s. I entered a multistorey departmental store and was greeted by salesgirls in cute uniforms. That store was selling different types of washing machines.

Walking around and exploring the building, I chanced upon a toy shop that sold replica handguns. A Magnum 45 model was very life-like but it was gas powered and could only shoot round plastic pellets. I was tempted to buy one but remembered our no-nonsense Customs police.

On the shelf next to the handgun was a remote-control toy robot. It was the 1/24th scale model of that fierce rival robot in Robocop - you know, the one that looked totally mean and which blasted one of the suits in a meeting to smithereens. Again I was very tempted to buy it. But thinking a little harder I realised it was all boys stuff and would be quite useless once I brought it home.

My next destination was Asakusa, a place famed for its old and huge temple. Actually the temple was more famous for its complex of small shops in the courtyard (which had a large iconic lantern hanging over its main entrance) popular for its jellied sweets and mochi, all individually wrapped in very colourful and exquisite packaging.

I'm not religious but was curious, so went into the temple and prayed. I made some offering and was given a printed piece of 'fortune' rice paper. The portents weren't great. I worry for Chee. Although I was supposed to tie it to a row of string for others to pray for me, I took the paper home instead as a souvenir. It's still there in my photo album.

As I stepped out of the temple to retrace my steps back to the subway station, I again spied that golden statue that looked very much like a piece of durian, or sh** if you like. I think it was meant to be a symbol of wealth and prosperity but certainly, there could have been other more palatable symbols. Nevertheless, I touched its goldness for good luck (or as an antidote to that earlier misfortune foretold) and went on my way wondering if I would get home safely.

Sometime in the 70s, a family friend introduced my mom to a form of Japanese Buddhism worship. The beads we used were rather unique, chained in such a way that it had to two strandly bits on one side and three at the other. We would put this chain and strandly bits acrossed our hands and between the fingers. We would rub them slowly as we chanted and prayed. The chant went something like this: "Lum mo oni tau futt, lum mo oni tau futt" twice. There was even a small prayer book. I remember the logo on its cover to be a phoenix bird of the Japanese kind.

On Sunday morning, I took a walk to the Imperial Palace. I could only see it from the outside, and the walls were high. The park around it was eerily devoid of people, like in some Ultraman episode. Wait a minute, is a monster gonna come and swipe down some buildings?

After that non-event, I took a train to that famous place for fashion rebels called Harajuku. Almost everybody there tried to dress differently. There was rock-and roll, gothic, cosplay - you name it. That weekend, a few bands were playing too on makeshift stages. From my overhead bridge vantage point, I could see various groups all spread out along the main thoroughfare. The place seemed closed to traffic.

Near the train station, a Hare Krishna group was dancing to drum and tambourine beats and accosting people the most with their religious propaganda.

I crossed the bridge and entered a shopping area. There were carts along the pavement selling trinkets and stuff, not unlike those found at our own Bugis Junction. There were quite a few shops selling 18th century European frocks, or what some behavourist might term Lolita wear. It was later, in the 2000s, that I fully realised how fascinated the Japs were with all things European - even in manga such as the terrific TV series, Monster.

I didn't hang about in Harajuku long. Much of the stuff there seemed geared towards very young women. I took the train to Akihabara to take a second look. As I was strolling along the main shopping belt, I noticed a bookshop (the open sort with books and stuff spilling onto the pavement) and stopped to take a look. I was quite surprised to find triple-X hardcore pornographic materials mixed in with mainstream works. There didn't seem to be any attempt at segregating what's for adults-only and what's not. It was done at the video shops, so why not the bookshops? And the materials were offensively hardcore with bondage and stuff done mostly to young, pretty women.

I found it all rather hard to stomach, and to reconcile culturally with the Japanese. Here is a culture that was by all accounts polite and civilised and seemed to treat their women with respect. Yet they would allow such materials to be freely browseable at a public bookshop? What about protecting the young from such adult material? How come the mothers are not up in arms over it?

I've read The Pink Samurai and yet still find it hard to fathom the Japanese pysche. They oftentimes seemed technologically advanced, yet on an emotional level, they still seemed pretty animalistic. Perhaps this is the reason why Japanese leaders are always making public gaffes saying the most outrageous things. It beggars the mind, really, that their worldview is so high-schoolish. Don't they do courses in critical thinking or even learn basic stuff about the human psyche and universal morality. Perhaps that's the price they pay for being traditionalists.

In the afternoon, I took a train back to Ueno station and visited the Shitamachi Museum in Ueno Park. It's a small museum good for an hour that showcased the old life around the old buildings of Tokyo before the Great Fire in the 1920s or earlier. I liked its many realistic miniature period dioramas. It was like stepping back in time and staring down at it from the heavens. At one section were several mock-ups of life-sized shops, including a traditional sundry store.

Outside, in Ueno Park itself, I was pleasantly surprised to find myself in the midst of an animal rights parade. Some folks with placards were marching with their dogs. Stalls were also set up along the avenue to educate people about Animal Abuse, especially those perpetuated in cosmetic research. There were pictures of rabbits with badly infected eyes and skin. Quite a few big names from the Japanese cosmetic industry were implicated. I seriously hope that these companies have stopped such practices. These is really little reason to use animals as test subjects. People could be paid and insured for that kind of job.

That night in Tokyo, I decided to spend it in Shinjuku. The Shinjuku Prince hotel was pretty X at US$500 a night. But what the heck, it was on company expense. I'd heard that Shinjuku was the night jewel of Tokyo and so felt compelled to go take a look. As I exited the train at the Shinjuku subway station, there was music and vibe. I followed that instinct to an exit where upon emerging to the world above, I was in the midst of a crowd gathered to watch a huge Sony Jumbotron screen with a music video being played. This was way way before the same thing invaded our shores (like some ten years later, on Lido's side facing the Borders bookshop). Somehow, I was not surprised by such a screen in Shinjuku. Everywhere I looked, there was neon light and glitter. I could tell that this was a place that did not sleep.

I saw an arch sign over a street and went to it. That usually denoted some sort of activity area (like a night market, old district, etc). In that street, I was again accosted by young chaps keen to hand out tissue packs to me. I took and pocketed them without comment. I did not want to offend anyone and get set upon. As a lone traveller, I had to watch out for myself. In any case, Shinjuku was like one giant club outdoors with plenty of eye candy of the neon sort. There was much to see and explore.

My last impression of Tokyo was walking past a sumo wrestling stadium just after a match. People were spilling out into the streets and chatting. I understood how the game was played but had little affection for the regimented way these people trained. It seemed way disproportionate to the slapping that aways went on in a match and its short duration. If size mattered, this was the sport for it - all that flabbiness (wrestler Atisano'e being the main cultprit). Looking at the giant match billboard, I wondered how this wrestler would look if placed in a wind tunnel. He would probably slap himself silly if he stood himself up against the wind long enough.

I smiled at that humorous image and stepped into the crowd. Quickly, I was swallowed up and became one of its many wandering souls seeking action, companionship and a thing to do under all that man-made light.