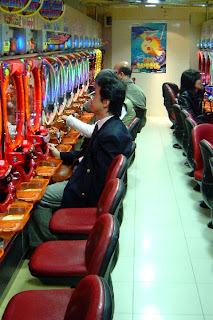 When I go on a company trip and have a weekend to myself, I often maximise that free time to go sightseeing. I'm pretty productive at it - why my colleagues would often look at my pictures and jokingly wonder if I ever got any work done when over there. Haha... The answer is simple: If you are not required to work and is in a new place, why not just go out and explore a bit?

When I was in Indianapolis, USA over a weekend, I went to a large IT flea market, a miniature train shop (from where I found some spherical dice), a children's museum, a zoo, and managed to take a road trip to see some covered bridges. These were made popular by that love story, Bridges of Madison County) then.

So this trip to Fukaya was no different. As soon as I returned from the Toshiba factory on Friday night, I checked out of my hotel and took an one-hour train ride to Tokyo. I then deposited my bags into a three-star hotel room that Caroline had booked for me (see Part 4) and left to walk around the night streets of Tokyo. My hotel was just next to the busy Ueno interchange train station, and it was teeming with night life that weekend.

The Ameyoko night market there is well-known. The first few stalls were already surprising me with stuff I couldn't find in Singapore: Knee-high leather fashion boots which I was sure a couple of my sisters would be most interested in. Each pair cost S$300 - a steal compared to what was available at home. Further in were stalls selling T-shirts and pants and an assortment of lighters and dried foods. To one side, small eateries sold steaming-hot cooked food.

As I walked along, I would encounter young men on the streets handing out tissue packs. On the backs of these tissue packs were suggestive pictures of women and a phone number to call. I could only guess that they were calling cards for escort services, bars and night clubs.

I'd heard that it was not wise for a foreigner to pop into a night club on a whim. He might end up being held hostage by the Yakuza (Japanese gangsters) and be asked to pay thousands of dollars for just a simple drink. This scenario was later played out in one of film-maker Beat Takeshi's gangster movies. In the story, an intimidated night club visitor's credit card was swiped for a few thousand dollars. It did not matter if he hadn't enough cash on him.

I'm not the night club kind of guy, so I there's no worry of me getting into that sort of trouble. Plus I know karate, so I guessed I could beat the Jap gangsters at their own game, that is, if they didn't come at me all at once.

In any case, I was curious so would pay extra attention whenever one of these establishments popped up along my strolling route.

The nightclubs I saw were quite unlike any I've seen. They were quite different from those in Geylang, where I grew up. Bright neons signs and gaudy vinyl panelled doors made them stand out.

In Tokyo, the neon signs were small - mostly shaped in a Martini glass with straw, as if to say cocktail rather than bar (with girls).

Quite a few were subterranean, meaning they were in a basement of some residential-looking cluster building. At street level, all you could see was a small narrow staircase going down to a basement. It's hard to believe that that narrow passage led to some night club. Don't people emerge from clubs in twos or threes?

As I was observing the night scene, I was trying to keep warm from the chilly night air. I kept my hands in my coat pocket. Before long, I realised it was late and decided to make my way back to the hotel. However, on the way back, I came across a big Pachinko parlour with its bright lights bouncing off an opposite building. I just had to step in to take a look.

I'd seen such parlours on TV and in the movies, and always wondered what the fascination was with them. People simply sat on stools and shot ball bearings the whole day, watching them drop through the slots. Where's the thrill in that?

I stopped at a machine and watched a young salaryman play. He was holding a half-full plastic bowl of small ball bearings and feeding it to the machine, repeatedly tipping a small lever to launch the ball. It was done in such a robotic manner that he didn't seem to care. I remember thinking he could have been home doing something more productive or useful. Perhaps he was there in that late hour to avoid issues at home.

The steel balls used in that parlour were not very large and each had the image of a clown stamped on it. It was the same image as the giant pink/white neon-light graphic at the front of the parlour. I picked up a couple of balls off the floor and kept them as souvenirs.

It was almost 1am by the time I reached my humble hotel. Sumo wrestling was on the telly. The image of two fat blokes in tight girdles slogging it out was the last thing I saw before falling into a tired but grateful sleep.

That night, I did dream of two geishas girls on each arm. They were fat and had hair swept up like sumo wrestlers. It was a strange but not all unpleasant dream. I woke up hungry and a little wet. An aircon duct was leaking.