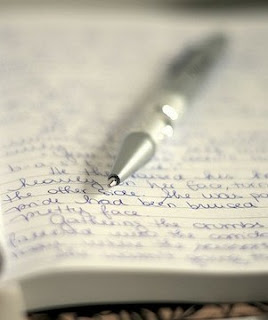 I just realised the other day that I've been nursing a peculiar habit for more than 30 years. It is this attraction to pens.

You can find one at Paya Lebar, an intriguing mess of a shop. A popular one at Sembawang SC has since moved to Yishun. There's another one at Woodlands Ave 6, opposite Admiralty Primary School. My favourite has been the very old one at Beauty World Centre. There are a few at Bras Basah Complex.

Whenever I see such an old bookshop, I tend to stop by to take a look. Invariably, I would end up looking at that round plexi-glass carousel where all expensive pens such as Parker, Sheaffer and Cross are kept. I would be like moth drawn to flame.

Funny thing is, I've given up on owning a pen for many years now. I presently carry a small little tuckaway (ballpoint) that's handy for jogging down quick notes...usually on the back of a piece of scrap paper. No one carries a small notebook anymore. I sometimes wish my smartphone to have scribbling abilities like the Samsung Galaxy Note. But it is just crazy to carry such a big handphone around! Other smart phones have a card scanner function, but I don't bother with it. I find snapping a picture to be more reliable and quicker.

Although I do not own a specific pen, the desire to have one is still there. This yearning to own something slim, sleek and shiny (the 3 Ses) is still very strong. It all boils down to wanting a perfect pen to write with. A pen that's a comfort to hold, ink that gives a warm feeling and pen nib-action that is both smooth and seductive. Oh, what letters I could write with such an instrument! Or a poem, a love note. Perhaps a thought. Maybe sign fabulous cheques with it even!

But alas, over the years, pens with sharp nibs have torn holes in my notebooks. Their ink has leaked and smudged neat works of mine (not to mention shirts). Scribbles that have ruined clear intentions! I just can't seem to find the right pen with the desired characteristics.

I am disgusted whenever my writing comes up looking like it's written by someone else. Sherlock Holmes would be stumped. It looks as if I'm disorganised, insecure and nervous ... qualities that I do not possess (well, most of the time anyways). But that is what happens when I write with an incompatible pen. (The word 'lousy' comes to mind!)

With much typing on computers these days, my penmanship has gone even further south. Have you tried writing a letter again?

I think the most recent hand-scrawling any of us have done is that paragraph on 'What's your next five-year plan?' in that last job application. How long ago was that?

Or perhaps that form you have just filled up for a free credit card, and pray not, a hospital admission form. These days, with so many condo launches, it could be a Letter-of-Intent.

In my case, the most recent form I had filled up was a police report, after finding some lost jewellery. The scenario writing took only 5 mins ("I was cycling by a bus stop and saw...yada yada.") but the police admin part took 1.5 hours. What? One and a half hours???

Yes, they were really making it difficult for me (or anybody else for that matter) to be honest. I certainly regretted afterwards going to that police post. Not only was the policeman there one-finger typing, he also seemed to be duplicating work. Their procedures could certainly be better streamlined.

That was not the first incident. The very first time was when my handphone got pinched at a nearby golf range. That took two hours. I should have learnt my lesson then!

But police admin, or a.k.a civil service admin, can be tedious. A case I did during my MTM showed how inefficient the Met Police were in the UK. That one involved a photocopier and how paperwork flow in the office prevented detectives from doing up paperwork quickly and less joylessly.

My first pen. The first pen I have ever come across as a kid was my dad's. He had a Parker Ballpoint, that popular one with the stainless steel half-body. The other half was in plastic of a solid color.

My dad kept his pen in his study desk. In those days, study desks - or writing desks, were common. His was not the roller-shutter type though - it had an angled hinged cover. This hinged cover doubled as the desktop once it was lowered. It was supported by two sliding beams as well as a retractable hinge. I wish the desk is still around; it was rather unique.

In appearance this study desk looked normal: It had cupboards and drawers below. Behind the cover, it had small shelves and envelope slots - features that were common in a writing desk then. But it had one outstanding feature that amused us kids, especially at a time when James Bond spy movies and Hardy Boys mystery books were popular: It had a secret compartment. It was located at the back and could only be accessed by moving the desk away from the wall.

This little secret compartment worked well. Parents back then often worried about being robbed at home, so this secret hole offered some mystery and security, keeping their valuables safe from ransack. We kids were obviously sworn to secrecy about it!

I liked my dad's ballpoint pen not so much for its writing abilities; more so for its iconic arrow that served as a clip as well. Robin Hood and his Merry Men stories were always a fixture during my childhood as was the game of Monopoly with its cute metal tokens. My favourite had always been the Racing Car. That Parker arrow would have made a lovely token!

I've come to realise this fascination with pens whilst looking at an old photograph from my secondary school days. I had written some comments at the back and it then hit me like an epiphany when I realised that I could actually recall the pen from which the ink had come from. It was a slim plastic Red Leaf with a button at the top and a small (square) retraction button at the side. A short unscrewable part of it was in dark blue; the rest of it was in beige grey.

At the time, I was experimenting with various pens to find the right one to use. This simple Red Leaf stayed with me for quite a few years up until Pre U! It was a record! The reason could be that the ink was an attractive shade of lighter blue; the body slim; and it was pretty smooth. It was also cheap.

I also tried using a fountain pen again. But it was just not practical.

I started using a fountain pen in Pri 4. Surprisingly, I still have it. One was a Hero, the other a Pilot. I also have a modern Hero look-alike Pilot fountain pen bought from Mustafa Shopping Centre in Little India. It has the same gold cap and Volvo Green colored body. But the insides are slightly different. The Hero has an inlaid pattern, reminiscent of those 'ancient' times when artisans still bothered to dress up their simple products.

I had bought that Mustafa retro Pilot pen some years ago. Once in a while, I would revisit fountain pen writing. I dunno, maybe I'm just a die-hard romantic because it reminds me of the very nice cursive handwriting I used to pen. Or the prettiness of ink when it diffuses on paper.

An ex-girlfriend shared this passion with me once. Both of us loved stationery design and would hang out often at Kinokuniya's at Takashimaya. One time, I brought her to Paris to tour and we saw some lovely modern-design pens at Galeries Lafayette. We didn't get any as the refills were not available in Singapore. A pity as the pens were designed with very strong home-appliance colors. Surpisingly modern, chic and youthful. Stationery designs often reflect a youthful, joyful mood. Perhaps these were the reasons that appealed to the designer in me.

In any case, I don't think my fascination with pens will go away anytime soon. Right now, I am interested in writing well Chinese calligraphy with a brush. The big characters are easy, but try writing them small.

So, not just pens. I am now fascinated with finding a good brush. Muji stores seem to carry a good one self-inking one. Oh my, it doesn't seem to end, does it, this love affair with writing? It's like reading. You'll go back to it one day just like how space operas in sci-fi seemed tedious and boring at one time.

Footnote (see bottom pix): Recently I came across this wonderful Parker 'pen' only to discover upon unscrewing it that it was a fake. The nib was a felt nib commonly found in bookstores (a Pilot V razor point?). The fountain pen nib you see is only for ornamentation. The felt nib was like any other slender pen refill. The pen wrote well (very smooth) and had a sort of shock absorbing action - unlike most fountains that tended to scratch. But - and this is the sore part - they offered gloss paper as sample paper to write on. Of course the writing is going to be smooth! At $SGD320, it was rather expensive for such fake technology. And the nib was nothing to shout about when used on normal paper. Go get a dollar plus Pilot V Razor Point instead. 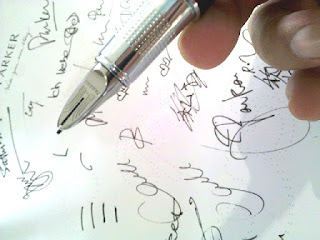