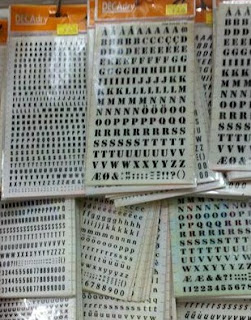 I found this scene in an old bookshop. For it is only in old bookshops that packets of Letrasets can still be found hanging about like this. No one uses them anymore, not since punched tags became popular followed by those super easy-to-use Casio/Brother handheld labeling machines. Labeling or 'choping' things became a habit for some people. Files, keychains, cookie jars, etc.

The death-knell was further rung by the arrival of cheap ink-jet printers. Making labels and greeting cards became not just easier, but more versatile and in color too!

These Letraset decals, however, bear a special meaning for me. I used to buy a lot of them to make unique cards for a special someone. In days before PC inkjet printers, using decals to make a sentence was common practice. The prints looked more professional. It was also something architects and draftsmen used a lot in their work, especially in labeling their models, maps and showcase floor plans. Besides sets of letters and numbers, decal sets also offered font symbols. It's what Microsoft Word now term as "widgets".

For me, once a decal phrase has been added to a greeting card, I would then protect it with a clear adhesive sheet, much like those used for wrapping books. In this way, the delicate letters would not be rubbed or peeled off. I would make the cards in a variety of colors using paper from a block of colored craft ones. It's an art form you can easily adapt as craft work with kids.

At times, I would put inside the card a piece of tracing paper that has been illustrated with line drawings done in Indian black ink (with a Rotring drafting pen no less). It was lovely like that. Black ink on grey tracing paper really stood out. And with drafting pens, there's a choice of nib sizes: 0.3mm, 0.5mm, and 0.7mm.

When that special someone is your first love, you do all you can to make that person feel happy, desired and missed.

I still remember the many designs I had come up with. My girlfriend's employer was so impressed she actually asked me to do up an ad for her in the Yellow Pages. The graphic was a silhouette of a crowd of office workers queuing  in front of a lady seated at a desk and typing. The silhouette outline was formed by a string. This lady boss ran a temp agency after all.

With my cards went several short poems. Unfortunately, it was all infatuation as I would realize later. But 'spring love' is spring love. And as the Chinese would say, "Spring love is eternal." I remember the dalliance with this girl well. I sometimes wished it had the good fortune to see autumn.

Previous story: A Pen-sive Affair Next story: In Food Buddies We Trust
Posted by TC Lai at 06:15