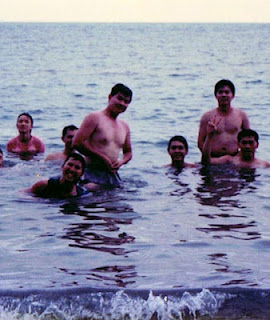 The seaside resort we had arrived at was located before a sharp turn of the coastline. It could be clearly seen on the map. Roadwise, it signalled the start of a journey to Desaru, some 200km away. Since we were just leisure riders, we had no intention of cycling all the way to that most famous seaside resort of Johor.

The 'resort' we had arrived at looked more like a small kampong than a tourist trap. There were no manicured gardens nor paved walkways. Everywhere was sand with shadows cast upon by short coconut trees.

A row of A-shaped "A-huts" lined one side of the compound. These were small and meant for two persons. Fronting the sea were a couple of bigger units with verandahs and deck chairs. I imagined relaxing in them and letting the sea breeze lull me to sleep. The resort was not shoddy but simplistic; it seemed new. It did give the feeling of living the rustic life. It was all very "kampong" indeed! (I believe the place was called Batu Layar.)

Prior to coming over, we had booked the bigger units, one each for the 'boys' and 'girls'.

After everyone had settled in, the next thing we did was change into our swim gear and dive into the sea. The tide was still pretty high.

Once in the waters, we swam and played games. There was "kare ma" (Cantonese for horse riding) or surf-jousting. Some of us swam; others hung around to relax and "talkcock" in the waters. After some five hours of cycling in the hot sun, the cool seawaters was a welcome. If my butt could talk, it would say "arrigato gozaimasu" to me for being so considerate!

Unfortunately the sun set too soon and we had to leave the sea for dinner. BBQ was being prepared for us. The dinner was ok, and aftwards, we set on the verandahs and chatted some more. Somebody had brought spirits, so it was doubly enjoyable. During the night, some of us lugged our mattresses out and slept on the beach. The sky was clear and the stars were clearly out to sparkle and welcome us in great spirit!

The next day, morning came with the call of cockerels making their typical announcement. For me, morning at the seaside is always special. It usually takes a little longer for the sea to wake. Everything is quiet until the waves come pounding. Then birds would fly about and the place is suddenly very much alive.

When we woke, the sea was quiet as it was low tide. But what we saw shocked us. The area we had played in the day before was surrounded by rocks! Not smooth, pretty rocks but black, jagged ones. We thanked our lucky stars that none of us were in that cluster and be torn unknowingly to shreds! It was really that perilous!

An hour later, the tide rolled in. It was then roughly 8am. Walking a little further onwards, beyond where the land curved towards Desaru, we discovered a better beach. It was wider and flatter and fringed by tall swaying coconut trees - quite the idyllic image usually found on postcards. Gladly, no rocks could be found along the waterline. However, the waves there were strong and noisier. The braver among us would wade out and wave-surf in. We found the waters extremely cold! But, what the heck! Fun was fun.

But we took care not to venture out too far off into sea. At Desaru, the currents could be deadly and people have been dragged out to sea and unwittingly drowned, especially kids. As an adult, I had experienced the same thing there before. Fortunately for me, I had my snorkeling flippers on or else I would have become another drowning statistic, body perhaps never to be found.

After breakfast and coffee, we did not loiter long. We climbed onto our bikes to begin the long journey home. We passed the melon fields, which now could be seen dotted with many workers. The uncompleted politician's home, the small tucked-away idyllic kampong, and then the sand quarry and finally the village of Sungai Rengit. We arrived just in time for lunch, which was a hearty fare of chilli crabs, foo-yong eggs and the usual Chinese menu-fare.

We also had a good dose of Coke and kopi.

Now certain of our way forward, we seemed more relaxed and so chatted and enjoyed each other's company the rest of the last 18 kilometres. We were also more playful on that now familiar ribbon of a coastal road.

Once back at Changi Village, we found Cheap John waiting for us with his van. We gladly handed over our bikes to him and adjourned to the nearby hawker centre. There we cooled ourselves down with some cheng-tern and ice-kachang desserts. Some of us ordered sugarcane drinks. In no time, everybody was quenched and happy. All of us agreed it was one hell of a trip. Someone suggested going again. But with bums still sore, it was not a prospect everyone was looking forward to at the time. Some mumbled "See how, lah". After all, most of us were still beaming with the heat of the sun on our faces and already growing an uneven tan!

For me, the trip brought our ragtag bunch of colleagues closer. We worked better and more cooperatively together afterwards. The trip also gave us common fodder for small talk and laughter during lunch and tea-times in the staff canteen. For that, it was priceless. I am sure if my bum could talk, it would agree and find it all a worthwhile sacrifice!