In Food Buddies We Trust 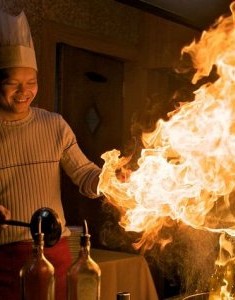 Background: I wrote this note about myself and Singapore food for an overseas food group on Facebook.

This doc lists the makan places I've been to in Singapore that have moved me in some way. Mostly they have given my palate much to ruminate about and my senses the dreams of new culinary adventures.

I am Cantonese by descent whose grandpa had come from Guangdong, China to settle in this land of lions and swordfishes. We are a tribe known to eat anything that flies, runs, and crawls. Stuff we find hard to swallow, we turn into soups.

As a transplanted Chinese in S'pore, my tastebuds have evolved.

As a kid, I ate chapati for breakfast accompanied by American peanut butter and British jam - far from what my grandfather woke up to as a kid. As a youth, I grew up fired by Malay chillies and seduced by Peranakan sauces. In work, I'd travelled much and often came home lusting for strange menus with names that twisted tongues and scratched heads.

Once, I even contemplated marrying an Indian to satisfy my craving for oven baked dough, curry and other busty delights. Busty as in full flavour, I mean.

A marriage of such convenience could have worked if not for my genes. My granddad had four wives. I am sure his taste in food was just as polygamous. And so, I've found it quite hard to settle. And it remains till this day with what I like to eat. It's a seduction, a courtship. A lovely lass that's hard to pin down but moves you enough to pen poetry. A dish can be such a darling. Flavours can be such flirty pheromones.

If the world once had three tenors, Singaporean food is the same. Its charm is resonated in restaurants, hawker centres and kopitiams.  Restaurants echo the island's always evolving cosmopolitan culture - from Spanish tapas to Chinese mala steamboat. Hawker  centres beat the wayang drum of streets once cluttered with cart food. Kopitiams sing the family hymn of familar dishes - dishes mom (or dad) could have cooked. Central to the kopitiam are two stalls: chap chye and zhichar. Two brothers - one of largesse, the other of invention.

In lay-speak, chap chye is what makes up a rice, a meat and a veg. You choose from an array of dishes in front of you. Zhichar is what you want the kitchen to cook for you. They are like the poor man's kitchen if you like.  But Singapore is such a food utopia that no man is poor. You can spend just as little or spend as much as you want; food still taste delectable. Abalone and sharkfins do not walk only in the gilded halls of 5-star hotels only.

But bear this in mind: The songsheet of Singapore's food is trebled and clefed by the unique cultures of its people: Cantonese, Teochew,  Hainanese, Peranakan, Parsi, Tamil, North Indian, Eurasian, Vietnamese, Thai, Indonesian, Myanmarese, and of late, Filipino. Expect the expected and yet some.  So, when you go looking for food in Singapore, tune in to the various subtleties. Char kway teow has cousins, mee goreng its fraternal twin. There's also food in town and food in the neighbourhoods (HDB estate, that is).

Good or bad, there's a range in-between. It's true. When it comes to food, everybody in Singapore has an opinion; - why I am sharing with you what I think is good and not what is best. Please keep that in mind and have an eventful culinary adventure in this not-so-small 'red dot' of an island. Foodwise, that is. It only takes 45mins to travel coast to coast.

Previous story: Love In Decals Next story: March Madness 1A - Pengerang
Posted by TC Lai at 06:27