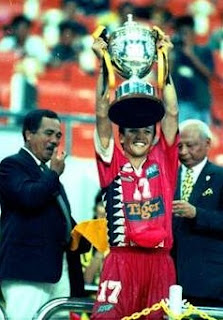 Whenever someone brings up the Malaysia Cup in football conversation, emotions run high. For me, I've followed the exploits of Quah Kim Song and gang, and subsequently those of Fandi Ahmad and Steven Tan. Didn't they used to call Steven Tan the Super Sub? In my mind, he's more the 'Damn!-He-Lost-The-Ball-Again' Tan. I liked the Malaysia Cup when Singapore was winning - not so much when they were whining.

Oh, they had genuine reasons to whine. Whenever they played in Malaysia, the pitch seemed rougher/the tackles much harder. The referees were also more "kayu". A match seldom finished without a contentious decision. These were the reasons why I didn't think Singapore should have continued playing in the Malaysia Cup. I believed the same problems would arise in the newly announced edition. New era, same bias. I can understand the practice our Young Lions need but to play in controversial matches again? Nah.

My interest in the old Malaysia Cup peaked at the finals of 1994. At the time, I was into my second job and had started dating. My object of affection was a slim intelligent girl who ran a family counselling centre. Luckily for me, she had a colleague who was related to Fandi Ahmad's manager and they both got on well. It was Fandi who invited us to go along for the finals. On that weekend, we drove up in two cars - me and D riding with the manager. The manager was unlike anyone we have ever seen in football management. For one, she was female: an elderly lady likely to be in her 50s. She had auburny grey hair and a maternal air about her. From what I could see, she had a penchant for silky floral print dresses. She wasn't slow when she drove, but she did drive with care. There were others in this Malaysia Cup party of ours.

The match was to be played at the new Shah Alam stadium. We had concerns about locating the stadium as it was shown on the map to be in some industrial part of KL, but that turned out to be a needless worry.

We first checked into a 4-star hotel on the outskirts of town. We had barely put down our bags when the manager excused herself to answer a call on her mobile. Later she told us that it was Fandi. She said he always got nervous about a match and would talk to her first to ease his nerves. We did not loiter long in the hotel but quickly left.

Arriving at the stadium, we parked our car at a sandy lot. It had fringe grass and some unused concrete drain casts, looking altogether unfinished. At football matches I'm always apprehensive about mobs, so I always look out for signs of trouble. That day, however, everything looked pretty low key. There were banners put up and people chanting from chartered buses. Everything looked ordinary and so we streamed into the stadium when the public loudspeakers beckoned. Once inside, we realised that we were among the early ones. But once the stadium started filling up, so did the noise decibels go up too!

The pre-match atmosphere was electric. There was singing and chanting and the passing of a giant square banner over the heads of spectators: the kind one often sees at large foreign stadiums like the San Siro or Bernabeu.

A lot of it had to do with the design of the Shah Alam stadium. Unlike our National Stadium which was small and dowdy by comparison, the Shah Alam was open, sweeping, and kept spectators close to the action. The seats (not benches) reached all the way down to the pitch!

Many of the Singapore supporters were decked out in red; we were no different. We also wore special-edition bandannas tied round our heads. Other folks used them as scarfs.

The match itself was surprisingly lobsided. Singapore had the upperhand throughout. And whenever our side scored, we would shout ourselves hoarse. We won, no, call that "thrashed the other side" by 4-0. Abbas Said was the hero, but we were just glad that Fandi Ahmad finally got on the score sheet. We were also happy for the manager that Fandi scored. We all felt that this match was Fandi's swansong.

My girlfriend and I never got to meet Fandi. We celebrated a little at the hotel and spent the night. The next morning the sun shone extra bright; we woke up feeling great. The Malaysia Cup had always been a kind of Holy Grail given the issues mentioned earlier and I was very glad we finally wrested it back to our shores. Given that Singapore was retiring from the Cup, we felt extra special to have been there to witness the momentous occasion!

Note: Singapore returned to Malaysia domestic football competition in 2012. And reached the final of the Malaysia Cup in 2015. Result? Akan datang! 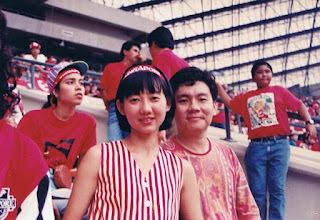