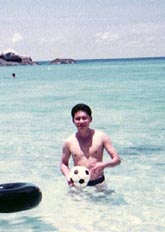 Another beach adventure I went with Set and the gang (my colleagues at IVP) was to Pulau Tioman, or Tioman Island. This island is perhaps Malaysia's most famous. It gained infamy after that movie South Pacific showed pictures of it. (In the movie, Tioman was known as Bali Hai). South Pacific was only the second Broadway musical to be turned into a movie (the first was Oklahoma!) so there was a bit of hoo-hah over it. Furthermore, Elizabeth Taylor was auditioned for the leading lady role but got rejected. The director found her singing voice to be not up to par.

In the 1970s, TIME magazine selected Tioman as one of the world's most beautiful islands.

The fame of Tioman, of course, made me curious. Up till then, I had only been to Sentosa and St John's Island and that micro island called Sibu that was also located off the eastern coast of Johor.

What I knew of Tioman then was also not flattering. For a long while, the island had been suffering from White Coral Death, a kind of cancer of the ocean. Tioman was no longer the island depicted in the movie South Pacific anymore.

Set, an active Johorean, was privy to this, why, when we traveled to Tioman, we did not frolic on its famed beaches. Instead, we went straight to a small outcrop just to the north of it (Pulau Tulai, I believe). Swimming in that small enclave was like swimming in a pool made out of Mother-of-Pearl. It was that colorful and mesmerising!

The corals were alive and fishes aplenty. I seriously hope the place is still there. At the time, it became our private piece of paradise. Our own South Pacific.

On the beach, we could find sea cucumbers. Big juicy ones which we unkindly used as water pistols by squeezing on them. There were so many we even made letters of our names out of them. But do not worry, no harm came to them. We simply returned them back to the sea. I did wonder however, if the creaturs were sentient. I certainly do not want people squeezing me and have my pee sprayed around like some pool gun!

After sometime in the sea and on the beach we came ashore to have lunch. We had brought our own stuff and it was all quite delightful. When it came time to go, we packed our things into our basin pails again. These basin pails were ideal as they could float. As we waded in the shallow waters back to our waiting ferry boat, we simply pushed them along in front of us.

Simple as that may sound, it also proved to be dangerous. Set, who was usually a careful chap, did not see a big rock in front of him. It had been blocked by the basin pail in front of him. I think he was distracted chatting with someone behind him. It seemed barely a knock, so Set dismissed as just a scratch.

Back on the ferry, we noticed that his cut did not stop bleeding. There was nothing much in the First Aid box onboard except for some lousy Handiplast. We applied that on Set's wound but it soon puffed up red and fell off. We continued to apply first aid till we got back on land.

Sometime later, when Set's wound showed no sign of improving, we began to be more concerned. I knew then it needed stitches and suggested we should start looking for a doctor. But as it was a long weekend and holiday, the island's clinic was closed.

Through the islanders' help, we made further enquiries. Eventually, a doctor who was on standby was found. It was pure relief to know that he/she would be able to see us that hour.

We quickly made our way to the clinic using whatever transport was available.

The place we came too was rather strange. It was familiar yet somehow foreign. Only when the lady doctor appeared and explained the situation that we then understood. She was a vet! The place was a medical facility for treating riding horses and other animals on the island!

Set and I exchanged glances and laughed. But he was like me and could see past the facility's 'animalness' and appreciate the doctor's skills. And so, we agreed to let the doctor treat him. We actually had very little choice in the matter unless we preferred Set to bleed to death.

A companion joked that Set was after all, strong as an ox, and so being treated by a vet was quite the appropriate thing. Again, another round of laughter.

In no time, the lady doctor had Set stitched up and bandaged. I felt bad for him as he was our trip's chief organiser. He should be enjoying himself, not getting all cut up! A couple of our girl companions took the chance to have their cut toes looked at. Theirs was less serious and required no stitches. They were certainly relieved to hear that diagnosis!

Extremely grateful, we thanked the lady doctor profusely and headed back to our holiday abode.

Though he was banged up and had to walk with care, Set's holiday on Tioman was not perturbed. We continued to enjoy fishing, playing cards and eating BBQ by the sea.

When Set's wound eventually healed, it left a strong visible scar. It would remind us fondly of a time when an injured young man was treated by a vet. Many people go on adventures but few get to say that.

Fishing during this trip also threw up some funny moments. In our group were two Mechanical engineers. One was named Lim, the other Anthony. Lim was much older than the rest of us and at times seem a little too eager to fit in. He was a nice man though. Both were, except Anthony liked to talk quite a bit. He would have some theory about this or that, no doubt encouraged by his work. He was section head of VCR mechanical designs in our factory and often had to validate his solutions to requested job specs.

To fish, we hired a ferry to bring us out to richer waters. Once anchored, we would throw our lures over the side of the boat and wait. Lim was very confident that he could catch a whole lot of fish. In fact, all along the way, he was telling us theory after theory how fish loved to bite his bait. The young girls in our midst listened with wonder. The rest of us were skeptical and decided to wait-and-see. Anthony, not one to keep quiet, embarked on a one-upmanship with Lim. "Yes, you sometimes must quickly jerk the line so the fish will not get away." Er, I tried that when I was young and all I got was the fish's lips. I felt so bad for that lipless fish (how was it going to eat now?) that I stopped fishing for a while.

"You can tell by the color of the waters where the fishes are."
"You can use flour as bait."
"No you can't."

And so on it went. Meanwhile the  ferry chugged on, trailing black smoke in its wake.

I was glad when the boat finally dropped anchor. We were now somewhere in the middle of the ocean. Now's the time for these gentlemen to put their skills where their mouths were.

Long story short, Lim caught nothing. Tried as he might - changing positions on the boat, lowering his lines to different depths, nothing. Zilch. Zero. Anthony did no better. Instead, it was the rest of us - those who had tagged along for some leisure fun - that caught fish. Even the girls who were novices caught something to make the trip worthwhile. It was funny to see Lim become increasingly stumped, then exasperated. Though red-faced, he did not offer too many excuses. Anthony on the other hand, had other theories to offer. He's quite the jovial chap, so one couldn't be sure if he's half serious or just jiving. He really should have been a salesman and not a Mechanical engineer!

Of course, BBQ that night was extra special. It's always is with your own seafood catch. I remember there was even a rare blue garoupa amongst the fishes caught. For once, Lim and Anthony kept quiet and just ate.