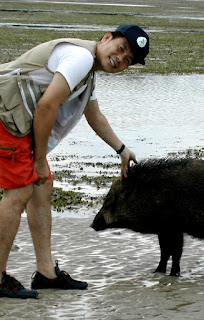 In 2001, I was invited to see Chek Jawa by my brother Joseph Lai. He is often credited for saving the place from certain reclamation. But back then, he was just an NParks officer and nature guide passionate about his work studying, cataloging and introducing the wonders of Mother Nature to mostly school children, first at the Bukit Timah Nature Reserve and then at Sungei Buloh Wetlands.

By then he had brought students many times to Pulau Ubin to marvel at its rich flora and fauna. Whenever possible, he would point out the island's indigenous plants and animals, creatures such as the ubiquitous red jungle fowl. But Joseph was in particular charmed by the intertidal flats off Check Jawa where a former village once stood on the northeastern coast of the island.

The Chek Jawa intertidal flats were indeed very rich in marine plants and sealife, stuff that many Singaporeans often paid good money to see snorkeling or diving in Malaysia's coral parks. That the place harboured such a rich marine habitat was by itself astonishing. I saw during my first trip there many coral plants and even held a giant nobular starfish, a creature I had not even seen during my many sea-adventure trips in Malaysia. There were also seahorses clinging to aquarium-like seagrasses. What's even more mind-blowing about the place was that it would soon be reclaimed. Reclaimed? you ask. Yes.

I couldn't believe my own ears too when my brother first told me that. What's more damning was the government claiming to have done a coastal survey and found nothing worth keeping. NOTHING WORTH KEEPING? How could that be? Were those so-called scientist surveyors blind? Or were they more concerned about protecting their academic rice bowls than do their professional duties?

Chek Jawa turned out to be much more richer than anyone could imagine. It was home to over a dozen species of seagrasses that dugongs all the way from Australia would come to buffet on. And true to our tourism habits, a replica animal was later erected at the site to act as our welcoming emissary. I wonder what the real dugongs think about that.

Besides the seagrasses, there were also a variety of sea pens, nudi branches, sea slugs, etc., including no small amount of sea stars and sand dollars. Everywhere I walked (and this was before the boardwalk was built) I had to avoid stepping onto some kind of carpet anemone that's left half-exposed by the receding tide. Often I would see one devouring a small crab. (Which reminds me much of single-mouth monsters in sci-fi shows like Space 1999!)

The whole Chek Jawa plain itself was a joy to walk on. When the tide was low, over 700m of exposed sand and grass beds could be seen. I could only imagine the crazy fun village kids back then had when Chek Jawa was a kampong alive and well.

For me, the highlight of the trip was meeting Priscilla, the star she-boar resident of Chek Jawa. She's tame and people-friendly. I was told she was once raised by the nearby kampong folks. Often, Priscilla would leave the flats with us at dusk only to stop short at where the tracks and barriers were, and where vehicular traffic started. She seemed to understand that those noisy four wheeled vehicles were a danger.

Patting her, I only wished I had an apple with me. I was told the fruit was her favourite snack.

That was my first trip to Check Jawa. On the second trip, Mr Mah Bow Tan was there. By then, my brother and his kakis had gotten the attention of the authorities to consider holding off their reclamation plans and save Chek Jawa. Besides the minister, Priscilla was there too. It was like meeting an old friend. But it was an old friend with a scar. We found barb wire marks around her neck. My brother told me then that some construction workers had tried to capture her for meat. We were both concerned, as were the other volunteers. But there was little anyone nor I could do to help. Priscilla was wild, and back then, there weren't any proper government agency there that could help keep an eye on her.

It was thus with much sadness to discover on my third trip to Chek Jawa that Priscilla had gone missing, presumably into the stomachs of some itinerant poacher.

It's furious to know that some people cannot just leave a good natured beast alone - one that could have lived a full life and given much joy to the many children that would subsequently visit the place. It's a sordid crime against the porcine kind really.

Afternote: We later discovered that Priscilla was not poached. She was found dead in the forest by some NParks rangers. Below is a note from Wild Shores blogspot:

"Alas on 27 May 2004, Priscilla was found dead by NParks rangers. There was no obvious cause of death aside from "a small festering wound, and blood coming from her nostrils". She was buried where she was found, next to the access to Chek Jawa's shoreline. Her final resting place may be unmarked, but her mark on many of our hearts remains till this day."

My brother was presented this plaque by mr Mah Bow Tan for his efforts, featuring the stunning nobular starfish (btw, the modern term for starfish is 'sea star'): 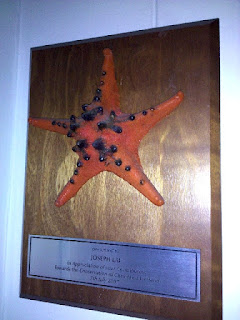 "This was my last photo of Priscilla taken on 2 May 04, patiently putting up with shutterbugs as she tried to cool off her butt in the mud." - from Wild Shores 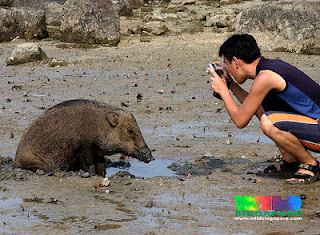