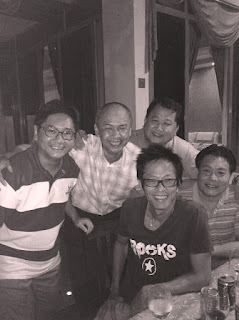 I don't often have reunions. One, I think I am still too young for that sort of thing. Two, some folks are still hung up about their past.

I've messaged hellos to a few old acquaintances on Facebook, but have yet to receive any replies. It's maddening.

Maybe they don't need the friendship of this old friend. After all, old friends can become new enemies. Perhaps they worry more about them becoming a nuisance in their ordered lives. I don't know. So many years have passed, anything that has happened should have flowed under the bridge or be swept away by the wind. Any envy dissipated, any misdemeanor forgiven. Or do they worry that the success of some puts them in the pale.

I believe if you have lived your life with just one person who relies on you as a friend, then you would have made it as a decent human being. After all, no man is an island. And we can't be friends with everybody in the world, can we?

The other day, I just had my first reunion of sorts with school mates and classmates from my secondary school - folks I have not seen for more than 30 years. I had met up with one of them last year and he had set the ball rolling.

One guy in particular, Harrison, I was glad to meet. He and I and a group of kakis spent much of our teenage years growing up in the then-new HDB town of Marsiling.

Old friends like him are hard to come by. For one, I have few precious photos from that era. As we chatted, our teenage shenanigans in that neighborhood resurfaced and played out again like some old movie. We cycled, we flew kites, we played soccer, we fished/crabbed and jumped off that now-gone jetty. We plucked soursop from wild trees near a kampong.

As we chatted, names of people I've forgotten got reunited with faces I once knew - people without whom my teenage years would have been vastly different.

And that's the point really, isn't it?

If only my old acquaintances see that then perhaps they would be more willing to show their aging faces before we don't recognise them anymore.

You see, we were all actors in someone's life. Importantly, we were acting a part that was not culled from a preordained script. And in that sense, none of us can judge or critique what has gone on or happened.

And seriously, how much did we know of each other's lives back then when growing up? Only that we had strict parents? - Folks who only let us join NPCC because the uniform was free? That we looked smart but were not rich? That we all had aspirations that got derailed at some point or other?

Our reunion started at 8.30pm and lasted till 2am. We covered a lot of ground. What I particularly found enjoyable were the boy-girl secrets that came out. Who liked whom, the friendly romantic rivalries. Stuff that only circulated in certain cliques back in school.

A girl classmate is still single. Three guys turned to one another, surprised, and commented. "See, we were all after her...giving her the illusion that one of us would propose!"

"It's our fault that she's still single!"

The guys there that night were excellent. And I guessed they must have all truly put everything behind them when Harrison was asked how come he was a year older than the rest of us. "I repeated Primary 6," he said.

The stoner amongst us stupidly asked "How come?".

"It was the trend then," was Harrison's reply, with a twinkle in his eye. That's how far we have come, and that's how it should be. Harrison was quite the steady chap then, and he still is. And he seems successfully now, judging by the large BMW car he drives. (No, I don't care much about such things. People can go drive what manner of cars they like, as long as it is not an oil guzzler. For me, ostentatiousness always smacks of Emperor's New Clothes, so beware what message you are putting out.  Everybody defines success in their own way. And I've known millionaires who don't even own cars in Singapore. They either bus or taxi (something I often do when overseas). They are right: Cars in Singapore are lousy consumption goods to throw money at.

For me, if you do right by your family, then you would have succeeded. Got children? Managed to send them to school? Passed. Got marriage? Happy and contented with one another? Passed.

There's no point in lamenting what could have been; it's the future that matters. And if we 'rediscovered' acquaintances can help in that regard, the better it is, isn't it?

As I grew older, I came to realise that much of my young life was dictated by the wishes of others; even when in school. In Sec 3, we were all streamed. Did we have a choice in the matter? Not really. And the Science, Arts, Technical streams presented were not always what they were touted to be. The Technical stream in Pre-U 1 & 2 went nowhere. Workshop was scrapped. I would find out why later when I wrote a master-level case-study for a public policy institute. It discussed the parliamentary debate on streaming policy in 1979.

Through my research, I discovered that the MOE was then a rather messed-up place, why LKY had to send in an economist like Dr Goh Keng Swee to put the house in order. After his spring cleaning, educators became more systematic in their approach to policy-making and implementation. They became more aware of "desired" and "measured" outcomes.More engineers, economists and systematic-thinking people began infiltrating the ranks of the MOE ruling establishment. Young people's lives could not be left to people who failed to analyse, plan and execute a program.

So, people like us studying up till 1979 were more like guinea pigs. This explains the many policy flip-flops at the time. Even those who went to the VIs (vocational institutes) were not immune. There was no proper assessment of ability during an intake (such as literacy level and age), potency of coursework, nor what's going happen after graduation. It's no wonder parents balked at sending their child there. They rather their kid enter the workforce or join a private apprentice scheme (like those from Philips or Shell). At least, with these options, their children had more hope, a more discernible future.

Reading the research, I was alarmed (and aghast) to learn that policy-making was mostly top handed down. Administrators back then were kind of obedient and dumb like that. They did not think how well a policy should be carried out or what 'Ah Gong' actually meant when he said we needed the Chinese-educated to speak better English. They just imagined what was dictated and ran with that.

And we students and teachers thought they knew better!

But they never did and we students and teachers suffered. Victims, all.

Dr Goh's spring-cleaning of the MOE in 1978/79 is all documented in a publication better known as the Goh Report (February 1979). It is a useful learning-document on how good policy thought up by some well-meaning politician can be so woefully implemented by a compliant and less-than-enlightened public-servant body.

Afternote: If you have ever struggled with English or Mandarin in school, take heart. Our situation has been described as such: "It's like the kids in the UK being asked to study in Russian, told that their mother tongue was French and they then go home and speak English." That's the reality majority of our school kids faced when going to school and be taught in English and learning Mandarin as their 'mother tongue'! Most spoke dialect at home then. (I'm Cantonese, not Mandarin).

Also, note that though systematic thinking is useful, it is just a thought process. It doesn't mean we educate our children better. It just helps us to implement and think though what we intend to do.

A Cautionary Tale: The Goh Report. Next story: Priscilla - Queen of Chek Jawa