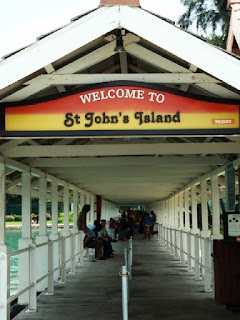 Going to St John's Island Camp must surely rank as one of the most memorable things to do in school. In my time, it was one of those things planned by MOE in what is today called "a learning journey". We learned camp craft, campfire sing-along and solved initiative tests to help build team spirit. We also learned on the sly, "birds and the bees".

For me, I went to St John Island twice. Once as a Sec 2 newbie and later as a student leader. We all did that: mature students passing on skills to the next generation. I remember vividly teaching my charges how to tell time from the shadows created by the sun. I drew many diagrams in sand, including one of a heart. It was meant for a special someone.

She was a schoolmate of mine. Sunny, cheerful. I had hoped to find an opportune moment during our camp to confess my affections for her. Surely on this sea-swept island, there would be a quiet spot away from prying eyes? It would be so romantic!

I marked out the locations: Tree with the sunset view, water breaker with gentle waves, cliff with dramatic view. But the chance never came. It was wasted wistful thinking and failed telepathic powers. If she couldn't read my mind, are we then meant to be?

After that, I put all my frustrations into learning how to fry beehoon for everyone. It was camp kitchen duty. Every group took their turn. But it was made worse by the fact that it would be our last breakfast on the island, meaning afterwards, good-byes would ensue. I was emotional as I stir-fried that heavy vermicelli. Mood as dark as the sauce, inside-tears as salty as the ikan bilis. But every stroke was an ode to love. Every flip, a  remonstration. Why didn't I just say something? Now she'll never know, that even then I was frying beehoon for her.

As I watched her eat, I was feeling full. The joy of feeding a loved one only a breastfeeding mother can articulate. She laughed, she bit on her chopsticks, she finished her beehoon.

Some more? I asked. Coyly, she said yes. Did she know? Ah, that twinkle in her eye! She must have!

As we boarded the ferry, I looked back on the island. I went there to teach but learned an important lesson. With girls, you cannot be shy.

So back in Singapore, I wrote her a letter. I paired it with some miniature dolls, a collection I had carefully nurtured and kept in matchboxes. How sweet that would be, pretty dolls for a pretty girl... in a match box full of fire like my heart was full of passion.

But the dolls remained distant, as did her. I never saw or heard from her again. Ah yes, at St John's there were many lessons taught, and just as many lessons learnt. I should have just sent her a packet of beehoon instead. Those damn miniature dolls were one of a kind and rather precious!


Next story: Stacy the Cat

Afternote: I found out later a sister kept her set of dolls!