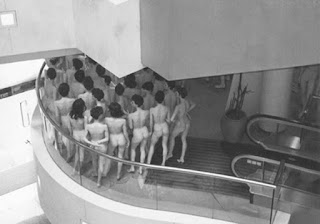 The uncertain economic situation of today reminds me of the one in the mid 90s. It was worse, actually. Retrenchments were happening left, right, centre - especially to folks in the retail trade.

The "lau jiao" in the office often say that playing dumb is the safest way to ensure job security. But that is not always the case.

Take this photo I happened to take quite by chance. The dummies inside were certainly all retrenched. No benefits, no clothes on their backs even.

I don't know the fate of these two ladies nor the rest of her fixed-glare compatriots, all I know is that there used to be this shop in Outram Park that dealt in dummies like them. Hiring them cost an arm and a leg (no pun intended). So these dummies in the picture should be worth quite a fortune. The only problem is that in real life, workers from China probably cost less to hire, and they probably won't mind standing around all day wearing nice clothes. Who wouldn't?

Beats being  a security guard who wears the same stuff all year round.

This picture was taken outside Galeries Lafayette when it closed. I was on my way to interview a big shot from Cisco (the network equipment people, not security guard) at Liat Towers when I decided to take the backstairs so as not to be late. It was fortunate that I had my camera with me. We reporters multitasked as photojournalists back then even.

I liked the French labels such as GL and Printemps. Their summer collections were always very sunny and cheerful, not unlike the French floral scene of that season. But in Singapore, summer-oriented clothes sell only to an extent.

Although we have a warm summer-like weather all year round, Singapore is actually a cool all-season aircon place. People do not wear casual summer clothing during office hours. We are definitely not some machete wielding, banana-planting republic where people move about in floral-print shirts, bernuda pants and sewaty bods all-year round.

The inverse logic can be said of leather shoes. Our days are mostly hot, so why are we not wearing sandals? Instead, we wear closed-end stuffy shoes and nylon socks. It's little wonder that many people suffer from bacteria infection between the toes all the time!

GL and Printemps in the 80s and 90s were like many foreign brands who beat a path to out retail shores. Remember Kmart and Lane Crawford?

Kmart was innovative with their 'Hourly Specials' - where bins were marked with a spinning red police siren. Why an everyday-man store like Kmart from the US would decide to set up shop here, I do not know. Singaporeans, after all, have their NTUCs and the Chinese emporiums before that. More damning is that both had an extensive network of outlets by then. Kmart couldn't beat that with just one store. But try they did, with cheap music CDs. That was something NTUC and the Chinese emporiums did not sell.

In Lane Crawford's case, they offered for the first time in Singapore a "curated" shopping experience. This is the kind of shop where goods are displayed like museum pieces, the difference being you can actually buy them. It is a popular concept with stores that have designer products to showcase and sell.

The danger in this kind of retail approach is that people might actually browse and not buy... often put off by the high designer prices. The interior of the shop looks pretty, the items and display looks cool. But, if that adds to the price, people are likely to be turned off.

Of course, shop proprietors often defend this kind of concept by saying that such goods are mostly aimed at high-value shoppers. I always wish them good luck. In a tight retail space (money-wise, that is) the walk-in customer is still king. If you want to attract high value clients, your location and network must match up, like when you are retailing a well-known brand such as Louis Vuitton.

I had this rather interesting experience with LV in Paris in the year 2000.

I was there with a girlfriend and we were walking down the Champs Elysee when we were accosted by two women dressed like "ah sohs" from China. They were indeed from Fujian province. They looked as if they had just walked off their village wearing their Sunday best. They spoke in Mandarin and asked if we could do them a favour. If they were younger I might imagine them as slave sex workers asking to be rescued. But since they weren't....

"Would you be so nice as to go into that LV shop and help buy us two pieces of luggage?" they said, not your typical slave sex worker plea.

They then explained that LV had a quota system for their customers every day and they had just used up theirs. They gave us money and promised us a commission upon completion of the task. These two ladies were very friendly and nice about the whole affair and so me and my grilfriend decided to help them out. What's the harm, we thought? It's not often that we get to walk into an LV shop and buy something! We actually detested being brand conscious.

In other words, we would have done it for free.

Before going into that the LV shop, the aunties made clear (through an official LV catalogue in their hands) the sort of bag models they wanted. We noted it all down on a piece of paper and entered the shop. The first thing that hit me was that it was well lit.

In fact, the shop's decor was quite nicely done up - not too gaudy nor too understated. The color scheme was wood and glossy black chic. It helped the bags stand out. One could tell that the products in the display cubicles were the main stars in this shop.

The quota system deployed by LV was actually quite effective; it kept the store from being overcrowded and becoming a mad house. We managed to buy what we needed in just 20 mins in relative quietude. I remember the staff there being rather haughty and snobbish. Perhaps they had a right to be. LV was, and still is one of the strongest brands from France. Wearng an LV bag is akin to driving a Mercedes or flaunting a Rolex.

When we left the store with the bags, the Fujian aunties were both relieved and happy. They gave us 500 francs for our effort. We were quite happy to have done it for free.

Back then, that sum could buy you two decent meals in the city. And that's what we did. We were curious how the common Duck a la Orange tasted like when cooked in France and so headed to the popular Simon's to try. The restaurant was rather large and country-like with green paisley tablecloth. It felt good.

The Duck a la Orange came and we were surprised to find that sliceof meat to be so thick and juicy. It was as big as a piece of steak. The French really do take pride in having a good duck on their table. (Recent studies show that duck fat is actually good for the body.)

With the left over money from the meal, we toted it up to pay for a daily fashion show at Galeries Lafayette the next day. I still remember the store. It was not too far from Paris' Hotel de Ville, which is French for town hall. And like the local store here, I liked their modern stationery designs. The pens, especially. Very Mondrian-isque in color scheme. Me and my girlfriend shared a  thing for well-designed stationery items then. Kunikuniya Bookstore was another of our favourite hangout place for that sort of thing.

That LV experience eventually got me thinking about the Chinese then. If these Fujian aunties would pay such high prices for an original LV, imagine the price it fetched in China itself. At the time, branded goods were indeed catching on, with pirated goods still far from being the perfect copy-item.

In any case, the lesson here is that retail businesses shouldn't die; they evolve. It's maddening that one store closes to be replaced by another. (Sogo and Yaohan are examples).

I think the problem lies in innovation.

If you don't bother to innovate and run with the pack, then, like the dummies in the picture, you will face the firing squad. Unlike them, be glad that you still have clothes on your back. (Unless you are working for day-time host Ellen; she'll probably let you keep your Ellen underwear!)

Afternote: Perhaps it is good to bear in mind the success of Dell computers. They sold computers as if they were bananas, i.e. short self -life, and made it easy for consumers to wire them up (color coded the various wires) - why the company was able to grow so fast. What if you were to apply the same principle to departmental retail stores?