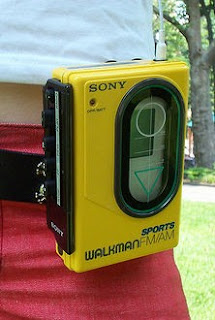 The current flood of tablets into the consumer market reminds me of the time when the Sony Walkman walked into our lives. The pattern was the same: a ground-breaking product being copied and improved upon by others in the greatest of haste.

Sony launched its first Walkman in 1979, and by 1982, there were already a slew of walkman-like products carrying brands like Aiwa, National, Sanyo, Philips, etc. These new walkmans were more compact, had more features, and some, even a radio. Auto-reverse soon became standard.

My brother he bought the original Sony Walkman. I think he still has it, including the carrying case. Perhaps the headphones as well, but not the sponge earpieces. They fell apart years ago.

I wasn't really a fan of the Walkman until I was in the army doing NS (1982) and felt the need for a portable music player. Maybe a platoon mate who liked to sing Chinese opera at odd hours influenced the decision. In any case, I headed down to Queensway Shopping Centre, Shaw Towers, Lucky Plaza to shop for one. These were the de facto places for Walkmans then (and school calculators). I eventually bought one from a shop in Shaw, not a Sony but a Sanyo. I liked it for its ergonomic design. Although it was meant to be carried around on a plastic belt clip, it was also designed to sit on a bedside table (see picture). The function buttons on the player were all easily accessible like that. I think I used the radio more than the cassette player.

Of the tapes I would play, they were mostly soothing guitar music or pop orchestra. Remember James Last? However, my favourite cassette tape of all time had to be Electric Dreams, that soundtrack album from the movie of the same name. The man behind the music was Giorgio Moroder, whose synthesized music influenced a generation. His No.1 hit, Together in Electric Dreams, was top-of-the-charts in 1984 for a long time; he and Philip Oakey.

When my Sanyo aged, I kept it for sentimental reasons. It had been through a lot with me. Like a diary, it listened to many of my quiet thoughts in the middle of the night even though I was the one wearing the headphones.

In the early 90s when I began exploring Malaysia more, I had another walkman to keep me company. It was a popular high-end  model from Aiwa. I think if you throw a stone in the air and it lands on someone in his 30s and above, he probably would have owned a product from this Japanese company. Or one that has been surreptitiously obtained, like some iPhone 4.

The way I came into this walkman was the same. I was withdrawing money from an ATM in Woodlands Centre to change into ringgit when someone tapped me on the shoulder. My first instinct was that a bum was asking for road-money again. No, it turned out to be a young man dressed in dark cord jeans and a rolled-up sleeved shirt. Plaid, and yes, he was Malay.

He was thrusting a box in an onion-skin plastic bag at me asking if I wanted to buy it. "New," he said, in pasar English.

Well, that kind of put me at ease because I thought he was trying to sell me ganja or some other forbidden drug. He motioned to a flower trough, we walked over and sat down (not in the trough but on its ledge). Inside the box was Aiwa's latest walkman model, the HS-J505 - the one with the BBE, High Definition Sound and Auto Reverse. AR was the big new innovation for tape decks then. The HS-J505 ran on two small batteries with an optional rechargeable pack that could be slid on from below. How cool was that?

Most walkmans were going for around $200 or less at the time. This particular model was retailing for over $300, nearer to $400. It was more expensive because it was a higher end model. Most people would just eye it in the showcase and move on. But here I was with this young man offering to me what looked like a brand new unit for only $150. It even had a warranty card.

Although I was suspicious, I had no reason to doubt this fella as he looked sincere. And besides, nobody was copying walkmans at the time like what the Chinese are doing now with the tablets. I did not have to worry about the thing blowing up in my ears or suffer some other form of faulty electronics anxiety.

And so I decided to part company with the three brand new $50 notes I'd withdrawn and yet to introduce to my wallet. After the young man left, I stood there holding the walkman box for a while; quite unbelieving what had just happened. Was I under a spell and sold a magic stone?

I needn't have worried as it turned out to be a good buy. The HS-J505 was indeed a wonderfully designed piece of portable audio equipment. It was so compact and 'solid'. Besides, its headphones were the bud types, not the macaroons from yonder bell-bottom days.

Well, like all walkmans before, this Aiwa followed the Sanyo into retirement after some years of use and neglect. It too had a bad case of slipped belt and dislocated hip. I tried repairing it, but each time, I ended up with more screws than I had started with. That is what happens when you try to dismantle something small and compact. It's nutty to even attempt, actually.

After buying all these walkmans, I received a Sony mini disc player as a present for a change. I tried using it to interview people in my work but it just simply refused to cooperate. Battery life was a critical issue. You know a product is pretty useless when even the karang guni man refuses to buy it from you as a 2nd hand item. And so it has since joined my graveyard bin of has-been gadgets - still shiny and new.

Well, I did have an urgent need of a tape recorder at one time, so, guess what? I bought another one. Yup, it was an Aiwa no less. I like it because it looks like a mini boombox with radio. (And a good one at that!) Now if only someone makes an MP3 player just like that, with the flick switches, faux or real VU meters, etc. I can bet you it will sell like hot cakes. Good too if they sold like macaroons!

It is sad to see the once-mighty Aiwa's fortunes decline over the years. It was eventually bought over by share-holder Sony, whose own walkmans diminished to just the weather-proof sporty types. After the purchase, the Aiwa brand suffered the same fate as Lotus 1-2-3 after it was bought by IBM. They did nothing to strengthen its market presence and simply let it slip into the dust of time and anonymity. A travesty, really, committed against these once standout household names.

But the Aiwa lesson is still relevant to 'second horse run' companies today. If you have success, reinvest that into a future product that people want. If you stop innovating, your business will be swallowed up by a competitor and be permanently put out of commission. You have been warned.