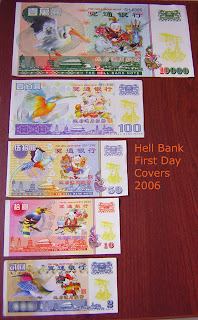 With Qing Ming around the corner, maybe it is timely to talk about getting rich after death.

I found this alternate Bird Series Hell Bank currency while passing a joss paper shop in Yishun. It was near a bike shop I often visited.

I was so tickled by it that I just had to buy the whole set. I later gave them to a visiting sister from Europe. She said her friends there would be amused. According to her, they would actually buy such notes back as souvenirs whenever they visited Singapore or elsewhere that sold them, like SF or HK. They were not as "pang tang" as we are about that sort of thing there.

Funerary items makers seldom get credit for the creative stuff they put out. In this instance I think the designer of this set ought to be applauded for his/her sense of humour and artistic skill.

There should be a formal ceremony to launch such First Day covers at the start of Qing Ming Festival. Maybe include them in an auction.

And I think burning currency that's close to real money makes better sense. Our dearly departed will not complain in our dreams that they are given "foreign currency" and hence have more difficulty spending them.

Hell Bank notes do have a history. Earlier ones always feature prominently the chairman of the Hell Bank, the Emperor of the Afterworld. I think he was an actual emperor of China when he was alive. Not many people can boast of such career continuity after death.

Or they feature a traditional Chinese cherub holding a peach or a carp.He would be surrounded by rabbits too. I find it interesting that these Hell Bank notes speak of auspicious things and not say, punishment or a better afterlife.

You can see these two symbols clearly being perpetuated on this alternate Bird Series notes.

In any case, many early Hell Bank notes are well designed and look positively ancient.

You know what, maybe I should start a hobby collecting this kind of currency. They are probably the only thing I can bring along to my afterlife. No Modesty Blaise comics, no cookbooks, no sci-fi books. The collection might serve as a conversation starter, an ice-breaker, or even a bribe (to make my life down there easier). But by then, maybe these notes will no longer be legal tender. What to do? Maybe there are Hell Bank bonds to buy. Now, isn't that something worth considering to ensure a comfortable afterlife? Anybody know a good, dead bond broker? 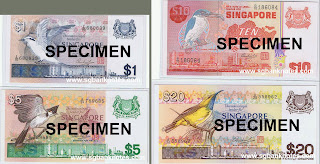