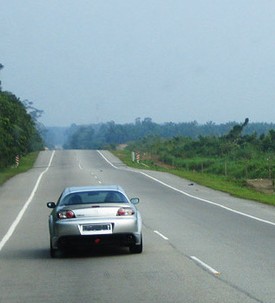 Another March/April long weekend public holiday, another island adventure. This time, Pulau Sibu. There, I engaged in a death-defying act and met Death. Death? Yes, eerie. But if you were there, you would feel the same.

Back then, Pulau Sibu was a newly minted four-star resort. The first isle besides Pulau Tioman to offer true "first class" facilities. First class as defined by a flush toilet with seat, air-conditioned bedrooms and a hot shower. In other words, honeymooners can go there without the new wife complaining of how cheapskate the new husband is.

Or she be bothered by mosquitoes and sandflies when making out on the beach. A place they can take snapshots of themselves singing karaoke, windsurfing or buddy canoeing... not just play the usual carom, UNO card game or Scrabble in a leaky and smelly thatched lounge.

The Sibu island I am talking about was where the very first Sibu Island Resort was built. Since then, it has been upgraded beyond recognition, tacked on with a cocktail pool even. With the new look, it was given another star to its former rating. Five stars now.

Pulau Sibu was small then and it still is. Very small. You can throw the proverbial stone and have it land on the other side of the island. Or a coconut would fall and somebody will hear it.

If it is so small, where's the charm then? Thankfully, Sibu island is narrow at the width but longer at its width.

I remember the island being surrounded by sparkling waters and white sand. Plus, the resort had few chalets. Meaning as a guest, you didn't have to fight anyone for a patch of beach space. And if no other guests turns up, you can jolly well be the only ones on the island. Wonderful, isn't it?

I first heard of SIR from Kim, my regular tennis partner. During a break in a game she had told me and our two other tennis kakis, Julie and Pauline, about this newfangled resort her German expat colleagues were raving about.

"Oh, they say it is really nice and cozy," she had cooed.

"Sibu Island Resort? Isn't that in the Philippines?" one of us offered.

"S-I-B-U, not Cebu," said Kim. "Apparently it is part of an island chain called Pulau Sibu. Sibu Island Resort is actually the smaller, middle one. And the best part is, it doesn't take long to drive there. We can spend more time on the island."

"I mean drive to the ferry terminal. Apparently Pulau Sibu is very near to the mainland unlike Tioman," said Kim.

At the time, Pulau Tioman was the most famous island along Malaysia's East Coast. But the ferry journey to that place was a long, some 2.5 hrs chugging along with sometimes choppy seas. With SIR, we could be there by 11am. Enough time to unpack and still catch a tan.

I might not have known of Pulau Sibu but I knew of the other islands nearby such as Pulau Tinggi and Pulau Aur. They were rustic and visited mostly by people who liked to fish. One of them was my NS staff sergeant, Francis Lee, who went there often to spear fish. He invited me once but I wasn't keen on punching holes in anything, let alone fish - creatures I could easily get from a supermarket. After as stint in the Army, Francis went into missionary work. Last I heard, he's running an NGO in East Timor. Way to go, man!

Back to the tennis court.

"Wait, how many days are we thinking of for this holiday?" I asked Kim. I hate to feel comfortable in a resort and then realise it is time to leave.

"Well, how about over the Good Friday hols? Four days?" suggested Kim. "The best part is my boss is also on leave. And he has left me use the company car." Kim grinned her biggest grin. That was good news instead. A big and spacious European car! And our transport problem solved.

Just as I was thinking how unusual it is for a guy to go on an island holiday with three girls, Pauline chimed in. "We could ask Kum Fatt and Yew Meng."

Both these guys were my buddies from NS (i.e. BMT and OCS). In fact, I had gotten to know Kim and the rest through Kum Fatt, my BMT buddy. All these other folks were from St Andrews Junior College. I was from CJC, a sister school. Our colleges at the time were better known for sports than academic excellence. They were also hotspots for boy-girl relationships (for the first year at least).

In the end, Kum Fatt couldn't make it but Yew Meng could (he and his girlfriend). With two other guy friends, we managed to round up a total of four guys and four gals; quite the neat pairing, I thought.

In the end, we had two cars (one from Fred) and went round Singapore to pick up everybody in the early hours of dawn and then headed straight over to Malaysia via the northern Causeway. There was no Second Link then. I was staying next to the Customs at the time and was the last to be picked up. That's one thing I liked about living there in Marsiling: its proximity to Malaysia!

The road journey to the ferry point for SIR was smooth and uneventful. I remember we driving along curvy kampung roads and passing villages that harked back to the 50s and 60s. It was really a pleasant drive except for a couple of instances when we had to overtake some road-hogging lorries that were packed to the brim with oil palm fruit or pineapples.

Of course, since we hadn't been to the island before, we had to rely on information from Kim's colleagues. They in turn relied on information provided by the travel section of a German executive magazine, now translated for Kim's benefit. Kim, at the time, had only a rudimentary grasp of the German language and was still undergoing lessons at the Goethe Institute.

The instructions to get to SIR were thankfully straight forward. There weren't many unfamiliar detours and we could simply follow the major road signs. But once we neared the coast, we had to turn off onto a rural farm road. That was the only time we felt kind of creepy. It always was back then when in remote parts of Malaysia. Probably less so today.

The road we were on was a dirt track with grass growing out in the middle. By the sides were fenced-up grazing grassland with no animals in sight. In fact, the simply wired fences looked kind of neglected. Sections of it were weighed down by wild shrubs and fallen trees. It seemed as if the farmers had found some other thing to do than plough land or nurse animals.

Malaysia's economy was booming then and tourism was on the rise. Folks like us (and expats working in Singapore) were making a beeline for their island resorts, star or no star rating. So many of the locals there joined the tourism industry for better income and economic opportunity.

As we drove along the farm road, I was looking out for coconut trees, a sure sign that the coast is near. I did indeed see them, and before long, our cars had to come to a stop. The road ended in a small opening right next to a ramshackle hut. We could also just see the sea just over a rise and some shrubs.

A skinny young Malay chap then arrived on a Honda Cub motorcycle. Young men like him all over Malaysia all seemed to like riding these 70-cc auto-gear two-wheelers from Japan. I was told they were affordable and consumed little fuel. In Malaysia, such a bike is indispensable for getting from one kampung to the next and to town. Waiting for public transport can cause hair on the chin to grow.

After an exchange of pleasantries, the young Malay chap instructed our drivers where to park their cars. He pointed to a squarish grass patch that was fenced up rather flimsily for our comfort. It was also gated by two hastily nailed-together planks that were chained to a post. It looked OK for fencing in goats but certainly not cars with superior horsepower and value.

Kim, who had large eyes, rolled them even bigger. "Er, he is not serious, is he?"

She did not appear to want to park her boss' expensive Audi in that make-shift parking space. Frankly, I wouldn't too. It was not even sheltered! The pressing concern was: what if the car went missing? Kim would have to spend the rest of her adult life indentured to her company, or maybe lose her job.

But what choice did we have? Turn back? Unlikely.

Seeing Kim a little upset, the girls gathered round her to give comfort and make conference. I didn't think it was a big deal because quite a few expats must have done the same thing in the recent past. So why should we even worry?

That was as much what I told Kim and the rest. The girls picked up on the logic and mollified Kim further with their sweeter voices. I could tell Kim was softening to the rationale. As added insurance we decided to pay the young Malay chap RM20 to look after the vehicles. That made Kim feel better and so, the matter was quickly settled.

The young man at first refused our offer saying it was his duty to his uncle. He only accepted after some persuasion. RM20 at the time wasn't a small sum and he didn't look the greedy sort. But it was better to have bought his allegiance than not. Back then, Johor had not picked up the reputation as a place where one could easily lose a car or be shot at beside a busy kopitiam. Or even have a purse snatched by a thief on a motorbike. All that would come a decade and a half later. Young men would also ask for money to do something.

With the cars safely locked up in the car park, we picked up our belongings and followed the young Malay chap towards the sea. He led us down a rocky slope and onto a backyard jetty just as a small ferry was arriving and sidling up to get us aboard. To those of us accustomed to formal ferry points, this backyard affair was quite surreal. But it was not exactly unexpected. Some kelong launch-off points were pretty much the same impromptu affair. Makeshift jetties all along the coast were used mainly by local fishermen.

We were not the only ones boarding the ferry. A couple of locals were bringing fresh produce to the island resort. We half hoped and joked that it included fresh lobsters and crabs!

The ferry that came was a wooden one with a small cabin typical of the many that plied between the islands in those days. It was painted green too. Back then, no one worried about life jackets and such. We got on board, kept our belongings away from getting wet and found a corner at the bow to sit in - a place free from trailing exhaust and where one could enjoy the fresh sea breeze and spray upfront. You know, the kind of things that told us we were finally on our way to an island resort and far away from the noxious atmosphere of city life.