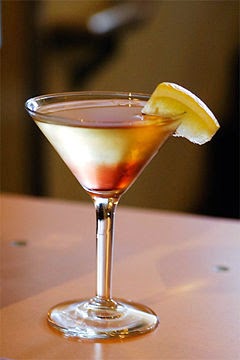 One of the more interesting PR assignments I have ever undertaken was to help a Swedish telecom giant organise a launch party in Stockholm. The thing to launch was a Technology Showcase Centre of innovative 3G handsets and applications. The good folks there wanted to open the Centre during a 3G Blue Sky (meaning endless possibilities) conference organised specifically for European users of their network equipment (i.e. the Telco operators in their own backyard). They wanted to give these customers a glimpse was what 3G mobile comms would be like after W-CDMA.

I was surprised that they asked our Asian PR agency to help them organise the event. Yes, we were international, but, er, shouldn't their own internal Communications people handle it? I think the reason could be that it was a huge (and important) affair for them and that they were also paying our agency a seven-digit retainer each year. In any case, my agency decided to send me over as I was the most senior person from the Telecom practice section and was rather meticulous in my event planning.

As usual, I saw a Road Blocks in that assignment, if I may borrow language from The Amazing Race.

In fact, one of the first culture clashes to crop up was the issue of drink. For some reason, the director of Communications (our client-boss) refused to have alcohol served during the mostly cocktail event. I asked him why but he would not say. All he offered was that no alcoholic drinks should be served during office hours. I could only conclude that 1) The Swedes don't hold their liquor well; or 2) They would go ballistic after imbibing some.

Well, I never really got that cleared up because the Swedes themselves confused me. I had a client-colleague there who would ask me out for a beer at almost anytime. And when I ate at their staff canteen - which, by the way, served up very good Swedish food! - all I saw were people drinking either coffee or fruit juice. They seemed pretty heath conscious, well-adjusted and showed no signs of any hangover whatsoever.

In any case, it was rather odd not to have alcohol during a corporate cocktail function. Beer or wine have always put people at ease through the millennial, so what's the beef? But more importantly, it's tradition or so I thought.

Naysayers probably felt better not to have alcohol at all, worried that the odd drunk might stand up on a table or something like that and make a fool of himself. The bigger the function, the higher the risk.

And with media folk around to see and report everything, I felt it was thus better to play it safe. Since my client had indicated his wishes (actually he was rather adamant about it), I agreed to go along with the No Alcohol rule. (Later, I would learn from another company director that the reason could be that some Swedish journalists tended to go overboard whenever there's free booze. Our client-boss director was afraid some might become drunk and behave like boorish louts. It had happened before apparently.)

Aside from drink, another thing I learned during my stay there was that you could furnish your office quite differently. I know, it sounds obvious. But don't we all have offices where we sit behind a writing desk and on height adjustable chair? It's the most typical of set-ups. But after working with this project secretary named Pia, I came to appreciate standing while I worked.

What she had in her office was an adjustable table that's set to bar top height. Instead of a chair, she had a small sofa put against the wall across her small office. So in effect, she would be standing most of the time whilst doing her office work. She only sat on her sofa to think, enjoy a cup of coffee or chat with a colleague. Lovely idea, isn't it?

Later, I was able to adopt the same approach in one of my offices. Instead of against the wall, I used the bar top table like a center island. What I discovered is that my table functioned well as a meeting place too! Much like a bar top in a bar! I would quickly gather the people, discuss the issue and then disperse them. No need to "chope" a meeting room and that kind of fuss. And no need to bum around on seats wasting time.

And I found that people on their feet tended to think and work faster. Perhaps it is just the act of not sitting on their asses that gives that sense of Get Go!

Physically, besides avoiding deep-vein thrombosis, standing (and walking) enables better circulation and gives better definition to the muscles of the leg and butt. Pia, as I recalled, had rather nice assets in those departments. Sorry, I didn't mean to pay attention to such things but I was sitting on that sofa behind her quite a few times. With my own bar top table, I did feel better not sitting down that much.

As a matter of fact, recent research indicates that sitting down for more than three hours a day can shave off two years of your life. So, quick, get that office table changed now and throw out that chair! And what's a bar top without a mini-fridge full of beer? Or an expresso machine! See, the possibilities are endless and changes much the traditional idea of an office!.

This table I designed consists of a recycled kitchen tabletop bolted to hollow tubes of clear acrylic (recycled). Artificial flowers have been placed inside to add beauty. Other things of choice may be placed inside, turning a normal office table into a changeable art object. The table top can be re-papered to a design of choice. 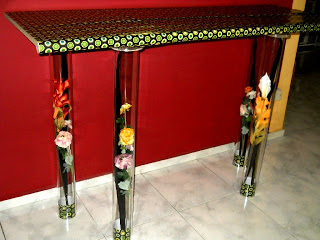