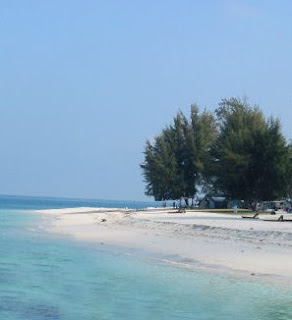 As told, the sea journey was relatively short. Surprisingly, none of us got sea sick. As the ferry slowed its approach to the Sibu Island Resort, we noticed something unusual. There wasn't a jetty in sight!

Instead, two resort workers were seen pulling pontoons out. We could ride on these with the rest of our 'barang-barang' or jump into the sea and wade ourselves in. Most of us opted for the latter. It was a great way to immediately start our new beach holiday! Besides, with such clear waters and white sand, who could resist?

The front of the resort looked to be in a lagoon. The beach itself was surprisingly short even if covered with alluring white sand. Beside it was the raised verandah of the resort's Admin building, a dark wood construction that reminded me of resorts in Bali and elsewhere. Not cheap, not expensive, just typical. The large verandah gave a 180-degree view of the sea and beaches. We found out later that below the verandah were the rooms for karaoke and storage for canoeing and windsurfing equipment. How convenient was that!

After deciding who to stay with whom, we checked into our chalets. The ones we had booked were essentially 'couple' affairs. Each had a bedroom, a verandah with coffee table and chairs, an attached tiled-bath with instant hot-water heater and a flushing seat-toilet.

We noticed that there were indeed few chalets on the island - just 22 of them, and they were all standalone affairs. The bigger units could be found on the back beach, a short 5-10 mins walk from Admin. The path to that place was not paved out but natural and surrounded by shrubs and short coconut trees. We were told we could request for fresh coconuts every morning - quite the novel idea to us young folks then!

The beach at the back turned out to be just as pristine as the one in front. But it was much, much wider. There were corals too, but sadly, all of them had died. It was all quite the pity because there was evidence of a wide swathe of them all along the beach front. Near where I stood in the waters was a path cut right through the middle. I would have loved to walk this path when the corals were alive and well.

At low tide this sight of dead corals was especially poignant. It can make a grown man cry. If these corals had not suffered from the dreaded "white coral death" (a cancer of the ocean) this part of island would have been a wondrous scene to behold... Not the graveyard of porous stone it is now. White as skeletons and just as eerie.

After the short tour, we quickly put away our things in the chalet and changed into our swim gear. The sun was still burning and the sky cloudless. By dinner time, we had all gotten wet and burnished ourselves with a tan. But only just!

Dinner was a strange affair.

Unlike the kind of cheap, fast-to-cook food one typically got from seaside island resorts, SIR actually had a menu typical of a Malaysian mainland Chinese restaurant. There was hor fun, mui fan, steamed fish, sambal kangkong, venison meat with ginger, etc. - Not at all the fair we were expecting.

We were pleasantly surprised (and hungry) after having just arrived and exerted somewhat. So we ordered what each of us liked. A couple of us did not have any preference and ordered just to see how good the cook could be.

That done, we put the menu aside and chatted as we sipped on our soft drinks and fruit juices.

Half an hour passed. Then one. Then one and a half hours.

All the while, we turned to look at the kitchen doorway ("hole" we called it) to see if food was soon coming out. But none. Oh, we could hear banging and clanging in there alright, but to what end, we were completely mystified. No one came out to tell us all was going well.

Then suddenly, the food came. There was no explanation why the delay. The staff were locals and did not seem to comprehend English very well. We decided to not pursue the matter. One cannot expect too much when in Malaysia. It's just not efficient Singapore, we told ourselves. The next time, we decided, to order ahead.

Interestingly, though the wait was tough, the food wasn't. The dishes were excellent! They really tasted like dishes back home. Never before had any of us gobbled up island fare this good and in such a gusto manner before, but that's what we did. The only setback was wondering whether we should order more and wait another eternity.

Just after dinner, as we were lounging in the dining area (which was next to the main verandah area and the sea view), the owner of the resort turned up.

Up till then I had not met anyone up-close who owned an island resort... let alone an island, so I was rather intrigued by this person. He was a big-sized Malay chap aged about 40-ish with an air of a "Datuk" about him. In other words, he radiated wealth and connections. That evening, he was dressed casually in khaki shorts and a short-sleeved shirt.

The owner - let's call him Mr Hassan - had dropped by to say hello to Kim. He and Kim had become fast telephone friends through the many bookings Kim placed on behalf of her expat colleagues (she being the department secretary and all that). Even Kim's boss had been to SIR too! So Kim was a VIP in Mr Hassan's eyes.

After the obligatory introductions, Mr Hassan asked us how our dinner went. We confessed it was surprisingly good and then politely mentioned the rather tardy serving time. Mr Hassan apologised and said his staff was still coming to grips with what was expected of them. He also confided that he had spent considerable effort in hiring a good Chinese chef to whip up both Chinese and Western fare. His reasoning was that a good resort should be matched by good culinary experience. On that note, he was right on the money. I mean there is little point in setting up a 4-star resort with crummy food.

I was curious what the island was before SIR, so I asked Hassan. He said,

"Oh, it was just a rock. I bought it from the government and spent money developing it," he said, sounding more like a technocrat than businessman.

"It wasn't just about building these chalets. That was the easy part. The difficult part was making sure the island had a good source of water and could handle the future sewerage. We couldn't run this place on bottled mineral water alone."

I found that statement rather funny. To many Singaporeans, bringing mineral water on an island trip was as essential as bringing toilet paper. In fact, probably more important, especially for the girls. To some, taking care of the hair was paramount, not to mention skin on the face too.

We boys who had been through National Service was less bothered. We just made sure we didn't imbibe anything unclean and catch diarrhea. Swimming with a weak stomach is definitely a no-no. 'Dark pools' could form unwittingly.

Through further conversation with Hassan, we found out that he had spent more than half a million Malaysian dollars buying and redeveloping the island. It didn't seem like a small sum nor was it an astronomical one. Monies involved in island purchases typically ran into the millions at the time, or so we thought.

A couple of us wondered how much more "under table money" he had to pay to smooth things along what with the Malaysian government officials known to take kickbacks. But we decided to be polite and not open that can of worms. I doubted he would even tell us!

Before Hassan left, he joked with Kim that she should have her honeymoon on SIR; he would give her a special rate. Kim, who was unattached, turned red and gave an embarrassed laugh. With that, Mr Hassan bade us good evening and wished us a memorable stay.

Later, when we got up to pay, the staff told us Mr Hassan had halved our dinner bill. It was to make up for the long waiting time. We thought that was rather decent of him to do that. He didn't have to but he did. He really was sincere about making the island resort work at a higher service level.

Suitably fed, we then sat around the verandah a little longer to discuss what we would do the next day. Some wanted to laze around, while others wanted to learn windsurfing. An instructor was available on the island free of charge for that. We simply paid per hour - or per day - for equipment use.

Later that evening, the girls went and entertained themselves in the karaoke room. They found it equipped with the latest song management system and had a blast till late. I sat and read a book by Robert Ludlum by the verandah and listened to the soothing sound of the sea waves lapping.

All through, I could tell that the resort was rather absent of people, just as the owner had intended. I thought how wonderful that is for a change. SIR might just turn out to be the resort game changer Hassan had hoped for after all.