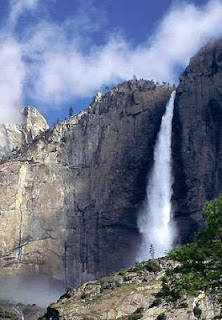 The next morning, May and I woke up at the Fireside Lodge in a bit of a funk. It usually is after an unbridled night of love-making. Fortunately, the coffee made by our lovely old-lady proprietor was fragrant and strong. The breakfast she served up was also nice; simple but appetising. Thus refreshed, we sat down and looked at our road map from the Budget car rental company once more..

Fireside Lodge was situated opposite the US Navy's Postgrad School at Sloate Ave, an innocent sounding institution but was actually a top-notch research facility where our own scholars have been to. The Postgrad School was strong in analytics (useful in establishing terror cell relationships) and some say even latter-day defence tech like DEWs, i.e. directed energy weapons. These DEWs could fry you like a microwave oven from a distance, useful for riot control. You'll be red like a lobster and don't even know it until it hurts. The US tended to test their early weapons in conflict-places like Afghanistan. I cannot help but imagine a hapless 'terrorist' combatant lying on the ground burnt to a crisp like a piece of bacon and frozen in extreme pain.

Sloate Ave was just outside of Monterrey from which May and I had come the day before. The distance from it to Yosemite didn't look far. We would be crossing some plains - a bit like travelling from the Shire to the Misty Mountains in The Hobbit. The highway route looked straightforward with few detours. The journey would be a piece of cake.

Besides, May and I both liked nature. The bonus was that we would be driving through part of the Sierra Mountain range too. How lovely was that going to be?!

Of course, being foreigners, we didn't know if it was the season to be there. A colleague of mine used to ask me to buy him Sierra Mountain Club calendars each time I was in the US. He loved the pictures that marked each month, which were mostly brilliant photos of hillsides painted in exquisite autumn hues and shades. The other pics showed indigenous animals such as the American eagle and fox.

We figured if we drove at regular speed, we could reach Yosemite before nightfall. We could even stay the night there even!

So, having reconfirmed our route, May and I returned to our room to freshen up. We then took along a 2-litre bottle of mineral water and hopped into our car. We could return later, spend the night at Fireside again and fly off back to Singapore and home.

The first leg of the journey was fantastic. It was very scenic.

Unlike the coast, this was all plains and distant rolling hills. For me, it was classic American countryside imagery come true: Fields of wild golden hay accosted by wind and shimmering in the sun. And where such fields were cut, there were pelts of hay all rolled up and lying in the sun. They looked like lemony log cakes waiting to be devoured.

This stretch of Americana beauty, I believed laid between Watsonville and Gilroy. We had left Monterrey and taken the Cabrillo Highway north towards Watsonville; it wasn't a long drive. Then we headed westwards towards Gilroy, which we saw on the map to be leading to the foot of the Yosemite range or thereabouts.

It was such a pleasure to drive through such scenery.

In Malaysia, when we drove up North via the east coast inland, much of what we saw were palm oil plantations. They were either full trees or chopped and burnt to a stump. Here, in American out-country,  it was all open plains and far horizons. Very much less claustrophobic.

The way to Gilroy was hilly. We often had to wind in and out, dip high and low. Some stretches were isolated but that did not make us feel lonely. For in some distance would be some farmhouse or community. Quite a few had those ubiquitous grain silos.

When we approached Gilroy, we noticed the land flattening out. Now the highway was much tree-lined. We also noticed something else, the smell of garlic. It invaded our senses way before we even reached the source of it, which was Gilroy itself. It made me think of the Doppler Effect; this time applied to smell, not sound.

At the time, May and I did not know then that Gilroy was famous for that vegetable. We only knew after reaching Yosemite and saw garlic-themed souvenirs in its gift shop. 'Gilroy'. Gilroy who?

So, oblivious to its fame, we did not stop at Gilroy town. We did however make a stop at one the many fruit and veggie stands outside the town and beside the highway (which was a B-road, actually) to pick up some nourishment.

What's funny is that I would later dream of visiting a fair in Gilroy and see all kinds of things made out of garlic and its derivatives, just like how some crafts people would abuse macaroni and make inane stuff. I think it was right after watching a food program that featured the garlic town. It's really interesting how your subconscious would make things up to compensate for life's missed opportunities. Oh, by the way, another famous product of Gilroy's was peanut butter. A favourite bread spread of mine.

One time, after entering a straight stretch of highway, we drove past a huge white sign with red letters and an arrow pointing to a Red Top Fish Museum. Red Top being a place-name. But really, a fish museum?

We were driving fast and did not bother to stop to swing back. I imagined the museum to showcase walls of taxidermied fish. Perhaps even prized trophies of local fishermen.

May, on the other hand, summarised the setup quite neatly: "So, it was just a 'kiam hur' (salted fish) museum. We can skip it then." I think May was worried we would bring the smell back into the car. Good point. But, haha.

I laughed at her comment and expressed the thought that maybe our friends in Kuantan, Malaysia (where we once had great Salted Fish Claypot Rice) should take up the idea. They were after all the kiam hur capital of that country.

From Gilroy, we targeted another intermediate lankmark to help us get to Yosemite. We picked the large town of Merced located about 100km away as measured on the map.

What we didn't notice at the time were the two highways - No. 99 and No. 5 - that came in-between. On the map, they looked like two faultlines we had to cross from Gilroy. More sinister still were the mess of crisscrossed roads between the two.

Now, after driving on US roads for a while, May and I had come to appreciate the help the many road signs along the way provided. So far, they had been accurate. But that was all about to change.

What we learnt is that in the US, sometimes major highways would rope in minor B-roads as part of its system. This was especially so in helping it connect one highway to the next.

So, although it looked like a straightforward job driving from Gilroy to Merced, May and I got lost in that maze of B-roads between the two.

We made one wrong turn and that burned up an hour going in the wrong direction.

But despite that, we found the drive interesting. We passed really small towns with few people. Real American small towns with their Main Avenue as the main road connecting them to other civilisations.

Many of these small towns were sitting on flat plains, continuing a landscape we had embarked on since Watsonville. But that started to change as we neared Merced. The terrain became more mountainous and the weather more wet than dry.

As our destination Merced neared, May and I were glad. We were getting hungry so we stopped at a fast food burger joint on the outskirts of that town. The restaurant was a typical single-storey flat-top all by itself off the highway.

May and I had learnt long ago that it's better to eat light when driving so we ordered the least we could.

After the meal we again topped up on petrol just in case we couldn't find any later on. As I pumped petrol and looked at a small community outside of Merced nestled amongst some hills and trees, I couldn't help but think how similar it was to towns featured in movies like The Deer Hunter which starred a young Robert de Niro. Or the one in that horror series called Harper's Island. You know, places that are wet, cold and where folks liked hunting and fishing and carving things up?

Always in these places (in the movies), someone would use a woodchipper to grind up a neighbour or some unwanted trespasser into a bloody pulp. Then they go and welcome another unsuspecting visitor with smiling eyes and a cup of coffee.

Haha...Horror movies are either cautionary tales or fuel for an active imagination! In any case, I felt safer buying coffee from a fast food joint.

Not long after Merced, we entered what looked like Sierra Mountain country, a place I'd seen featured much in sought-after photo calendars and National Geographic features. In these publications, the trees always looked colourful; the rocks imperious; and the streams sparkling. Even the weather was bright, dry and shiny.

Now, what May and I saw before us were all devoid of that. Everything was either in a shade of rust or grey. Most trees and shrubs were "botak", shaved of foliage. I don't know. If I didn't know better, I would say my car's windscreen had switched from Colour to Black & White.

I imagined we must be on our way up to the Yosemite peak, why else would we be driving up an incline, gentle as it was. The road was narrow and two-lane. But really, of what nature we would find, I was beginning to have my serious doubts.