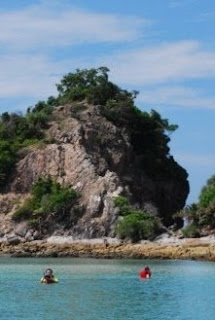 When I woke the next day, it was still early and the sun had not yet risen fully. I took to the footpath and walked that short distance across the island that led to the beach on the other side. It was strangely still and deferential  I looked at the dead corals again and was reminded of the killing fields of Cambodia. Here, instead of piles and piles of bones, were piles of dead coral. I wondered what it would take to revitalise the whole marine zone.

I skipped a few stones into the sea and retraced my steps back to the footpath. The kitchen should be serving breakfast soon and the rest of the fellas would be up and waiting.

The second day was all sand and sea. A few of us tried canoeing and windsurfing. I either laid on the beach or dipped into the sea. I had canoed quite a bit in my youth and so had no more interest.

But windsurfing was catching on in Singapore at the time and so I was keen to try it out. However, the winds that day were not very cooperative. I decided to just laze about and get tanned. Later, we all got together and played volleyball on the beach.

Around late afternoon, we went on an excursion to "big brother" island (i.e. Pulau Sibu Besar). In size, it was about six to seven times larger than Pulau Sibu Tengah (aka SIR) and about 2 km away. We visited one of the five resorts there. Unlike SIR, they were the backpacker sort each served by its own flimsy jetty.

Some guests we saw there were sun-bleached, wiry and wore headbands. They looked very much like the seasoned hippies of the 60s. I remember thinking they were no different from "harm yu" or salted fish laid out in the sun too long. It made us wonder how long these over-tanned folks had been living on the island!

On the second day, we learnt from those who had canoed a sea eagle's nest around the left side of the island. It was nestled in some rocks quite near to the beach below. The cliffs on our island were not high, roughly six to eight storeys tall. Only the top of the right cliff was accessible via a narrow footpath.

From up there, we could get a good panorama view of the ocean as well as the sea route our ferry had taken in from the mainland. Although the cliff was small, its stony facade somehow injected a natural sense of ruggedness and adventure to the place. They bear an inscrutable testimony to outdoor life.

The reason that the eagle's nest was so low is that the place was isolated and free from human encroachment. The nice beach there could only be accessible by boat.

We knew it was nice because the owner Hassan had told us during that first-night conversation. He was describing the new kind of clientele he was targeting at and related the story of a well-off Indian couple who were there for their wedding anniversary.

Wanting a private beach moment, the couple had approached him for help. Hassan then picked out that familiar spot of beach where the eagle's nest was, knowing full well that no one else could get there on foot.

"That Indian couple then had a late night picnic with champagne and stuff. We picked them up later when they were done. It was, however, much much later," Hassan said, winking as he did so.

I saw the beach the next day, not by swimming but by board canoeing. That's when you sit on a windsurf board and canoe with a paddle. I was bored and wanted some adventure and so set off on my own. I figured I would be safe as the windsurf board would not sink!

The beach was indeed nice. White sand with clear waters walled in by some rocks which gives it a private, lagoony feel.

The waters were surprising shallow for quite a distance, and colorful. There were many big rocks that somehow  gave off colors like the underside of an oyster's shell. Pretty. The shallow shoals made me wonder if they stretched 2 km all the way to the bigger island like a place I've once seen in Sabah.Over there, at low tide, one could wade some 500 m to an opposing island.

The sheltered bay of Eagle's Beach (as we named it) made the island feel near and safe. But once I got to the turn, that's when the sea really opened up. It made me feel as if I was in a paper boat bobbing in a large ocean. In such a situation, it is hard to keep faith with a flimsy surfboard but I held fast, convinced that it would not break whatsoever.

With a canoe, I alone could not right a capsized one. Trust me, I've tried that many times during my canoeing days. You would need a buddy in another canoe to help you. With a surfboard you could even paddle without an oar! That's the reason I went 'sightseeing' with it.

Now facing the open sea, I began to think about sharks. Are there any? A Big White has been known to taken a chunk out of a surfboard before. So, maybe my smart idea wasn't so smart after all! I decided to paddle on and keep my eyes open just in case. Big Whites were known to roam the Gulf of Thailand which was yet many miles away from where I was. Still, one should be wary. Stories of rogue sharks attacking swimmers in coastal waters surface from time to time - kind of like how car park wardens turn up from time to time to remind motorists to park well!

Having made that turn, I now find myself along the back of the island. The familiar sight of chalets and those dead corals (undersea) gave me comfort. I didn't go too near to the beach though, but stayed a comfortable distance out to see if I could spot any still-alive corals. Sadly, there were none.

As I paddled on in this little adventure of mine, the island became bigger. I guess the reason was that much of it was inaccessible and hence not factored in. Also, that short footpath through its middle between the beaches also gave the false first-impression that the island was small. I mean you cannot judge a woman's assets by her small waist alone. Look at Dolly Parton.

And just like Ms Parton's curvaceous outline, I eventually reached another turn and came up against a big lump rising into the sky. It was that same eight-storey high rocky precipice I had seen arriving on the first day. Looking at the same cliff now up close and from a flimsy surfboard, my feelings became different. It's not so much awe-inspiring as bleak. It was a cliff no one could climb. It was simply an absolute obstacle.

That thought reminded me of one of my favourite movies, Papillon. It is a 1973 movie about a man of the same name (Papillon is French for butterfly) who refused to surrender to the harsh prisons he was sent to after being convicted of a revenge killing he claimed he was wrongly accused of. After several near deaths, escapes and recaptures, he was eventually sent to Devil's Island, a place so ensconced by sheer cliffs and rocks and buffeted by strong waves that no one could ever escape from. But escape Papillon did, and quite ingenious too.

So, in view of all that Papillon went through, my own round-the-island adventure was really child's play.

From the cliff, it was a matter of minutes before I paddled myself back to where I had started: the front of the resort. But not before battling some strong currents.

I was hoping to just slip unnoticed into the verandah and sit down for a drink but some of my friends rushed out to ambush me. One of them was pretty livid. "Where the hell were you? We thought you had drowned or something! We looked everywhere for you!"

I felt sheepish then about going out on my little adventure without telling anyone. I came to realise that I shouldn't be taking my friends' concern for granted. I apologised to them and explained that I had gotten carried away. It was true in a sense; I had wanted to see the Eagle's Nest. Fortunately, the matter was soon forgotten. The guy who had made the most noise was Yew Meng, my OCS platoon mate during NS. I thought he should have known better that I could take care of myself. We were in OCs together! But would he have approved if he knew?. Probably not. But Yew Meng is a mother hen like that.

But for an hour or two that morning, I felt like Robinson Crusoe or Tom Sawyer going on a grand sea adventure. Sometimes a guy gotta do what a guy has gotta do in order to experience new things. Else, you wouldn't be reading this story now, would you?