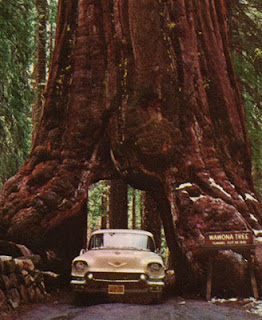 This story continues from USA 5 - Yosemite 1

After driving for a while and getting all funked out by bland scenery, we arrived at a giant redwood forest. This was the same kind of place as Muir Woods which we visited in SF. But from the marketing brochures, the trees here seemed thicker and taller; they were like the "giants amongst giants!". It was also here that that famous Tunnel-Thru-The-Tree could be found. (A redwood tree so thick that they made a hole so a car could pass through it.)

May and I did not stop to look at these giant trees. We simply observed them from the car as we drove past. Light was fading fast and we could no longer dilly-dally on our way to Yosemite summit.

How far more did we have to go? Well, our map was not very helpful. It was a tourist one, and did not have precise info like 'elevation'. And since this was a mountain climb, distances on the map would be much shorter than in reality. That threw any real ETA (estimated time of arrival) assumptions out of the window. The road signs along the way were helpful as they gave distance-to-the-summit numbers but were rather scarce. The other alternative was to note the every-mile small-pillar markers by the roadside. However, in the gathering darkness, they were getting harder and harder to spot. We would have to stop the car to look at them, and we weren't too keen to get out of the car in that semi-dark wilderness. Aren't there supposed to be wolves in the Sierra mountains? In any case the two-lane road we were on pointed up, so all we had to do was to follow it to its natural conclusion. The good thing was that our car was proving to be very reliable and trouble-free. The odometer was clicking along nicely telling us how far we had come.

By 9 P.M., the sun had completely set and everything was pitch dark outside. I was surprised that there were no street lamps to help light the way. Don't four million people visit it every year? I guess they were trying to preserve its natural environment.

In complete darkness, we could only rely on our vehicle headlights. It was kind of strange driving in such conditions. At every turn our headlight would flash off a rock or hard granite surface. After a while the effect became strobe-like and hypnotic. I had to sing or make conversation with May in order to not fall into a trance. The radio was useless at this point. Shielded by terrain, it played only static.

In some places, the rocks looked huge, and jutted out. However, it was just the glare of the headlights playing tricks. I always had to refrain the tendency to swerve.

In any case, we drove on like that without incident. By the time we arrived at Bridal Veil Falls - a lower Yosemite attraction - it was already 1 A.M. We thus couldn't see the waterfall (why the 'veil' reference) but only heard it. May and I took it as a cruel joke and left it at that. (It became a kind of running joke with us afterwards.)

From Bridal Veil Falls, it was just a short drive to the Yosemite Park summit where the Visitor Center and The Village Store were located. There was even a restaurant. And yes, the Village Store sold their souvenirs as well as Gilroy's garlicky ones.

As we sat in the restaurant to perk ourselves up with coffee and a light meal, we learnt more about Yosemite Park itself and its famous sites from some tourist brochures we'd picked up from a rack. According to these write-ups, there were quite a few giant 'domes', i.e. giant bald outcrops that look as if a piece of rock has been cleaved in two. As a result, sheer 90-degree cliffs formed. They rise skywards for a few hundred metres at least and are thus popular with rock wall climbers and movie producers alike. I believe the opening scene from Star Trek movie, The Wrath of Khan, was filmed there.

Another attraction the brochures said to not miss were the waterfalls at Yosemite. These often issued forth from fissures and cracks high in the granite faces of the mountain; they then plummet spectacularly to pools below. As a matter of fact, Yosemite do have some of the tallest waterfalls in North America - Bridal Veil Falls included. In Native American language, the Falls are called Spirit of the Puffing Wind. well, whatever that means!

The last attraction and probably the reason why most folks go to Yosemite are the many hiking trails there. These snake about Yosemite and the Sierra mountain range. The trails total some 840 miles (1351 km), the John Muir one being the most popular.

What's most disheartening was that all the pictures in the brochures seemed to have been taken in summer, where everything looked bright, brilliant, and in glorious colour. So summer was probably the best time to visit the park. Also, looking around the Visitor Center building, we came to realize that Yosemite Park was a very popular destination with schools and families, and that many would make advanced bookings to be able to camp or stay up there! And there we were at Yosemite Park on a whim!!!

No wonder we arrived late and missed seeing Bridal Veil Falls in all its full gushing glory like that seen in the brochure.

Looking at the brochures for stayovers, May and I regretted not bringing our luggage along. We had thought the journey to be short giving us ample time to arrive and then return to Monterrey. Now, we would have to drive back to our Fireside Lodge and then all the way back to the airport in San Francisco.

Not wanting to waste anymore time, we left Yosemite summit at 2.15 A.M. The road down was the same coming up: dark and unlit. But since we had traveled on it before, our journey this time was much faster. Pretty soon, we reached the near-bottom where the redwood forest was. We could see lights around the barracks (or were they dormitories?) some distance further in. Seeing a familiar place gave us comfort and confidence, and so we drove on faster toward the way we had come earlier.

In no time we even passed Merced and was once again travelling through the small towns between it and Gilroy. In the dead of night, these places really looked deserted, and sepia, in their yellow light street lamps. Not a soul was in sight. So imagine our surprise when we were stopped by a police patrol car. It seemed to have come out from nowhere.

Having seen many US police shows on our local TV, I knew to keep still and leave my hands on the steering wheel. I waited until the policeman came up to my side and gestured before winding down the window.

"Yes, Officer, is there a problem?" I asked, feigning innocence.

"Did you know you have been speeding?"

"You see that sign there? This is is a low-speed zone."

"Oh, I thought we were still on the highway," I said, which was true. Some B-roads were part of the U.S. highway system.

"Can I see your license?" asked the cop finally.

I had an international licence but chose to remove my Singaporean one instead and passed that to him. Back then, it was still that green piece of paper.

"And where is that?" the cop then asked.

"You're some distance away, aren't you? Where are you from?"

The cop then walked into the light of a nearby lamp post and looked at my licence, turning it this way and that. And then he walked back towards me.

"Look, I can't do anything with this. Here, you can have it back. Next time, try not to speed through the town area."

I thanked the cop and repocketed my driving licence. I then waved goodbye to him and continued on our way. May, who was roused from her sleep when the cop approached, now closed her eyes again and slept, clutching her woolen wrap around her to keep warm from the aircon. The cop followed us in his police car for a distance and then turned away. I smiled to myself, satisfied that my little ruse worked.

Back to Fireside Lodge

May and I surprised ourselves by reaching our motel, Fireside Lodge in Monterrey in a very short time. We probably took 2-3 times less time than yesterday going in the other direction. OK, we were driving at a leisurely pace going to Yosemite. But to get back to the lodge before 7.30 A.M. meant we took just five hours to cover that 450 km or more distance between Monterrey and Yosemite Park, also driving much of the mountainous roads in darkness as well. Still, that didn't leave us much time to have breakfast or say a proper goodbye to the Lodge's proprietor lady. Our flight was at 10 A.M. and we needed to reach the airport by 8.30 A.M. at the very least. So very quickly, we packed up our stuff, wrote a nice note to the proprietor lady and pasted it on her kitchen door.

I felt sad leaving that Lodge as it was very nicely done up with a fireside place and all. May and I really had a nice and intimate time there.

On the way to the airport, I realised it's not good to be pressed for time in an unfamiliar place. For one thing, I had to return the car to another location, not the same place where I had taken it from (which was at the airport basement car park). Thankfully, my sense of direction was quite good and we managed to find the drop-off place without much fuss. The only problem was that the slip road going in was on the other side of the highway. There I was, barely 50m from the exit of the facility.

So I did what any Malaysian or Singaporean would do under such circumstance. I looked out for traffic and drove against the flow. Heck, it was just that 50m and saved me, well, God knows how many minutes the other way! I mean once you get on a highway, you'd never know where the next exit might be! There was no time to dawdle and so I had to make a quick decision.

The drop-off facility was actually a fenced-up hangar-like building with a sand parking lot. After signing off on the car, we waited there together with a few other customers for a shuttle bus to bring us to our respective flights. Thankfully, the wait was short and soon we were airborne and heading for home. No drama throughout.

I must say that this holiday is one I wished could go on for some more days. Driving with May had been such a pleasure. It always is when that person is good humoured and importantly, able to navigate as well. Years later, when I am old and decrepit, I can look back on this trip and die happy. Wouldn't it be nice to meet May on the other side and start a new journey?